I have been wanting to go for a while, but with the closest Ikea store in Atlanta, I just didn’t see that being much of an option, especially with having three kids that don’t exactly like to spend their days riding for hours in cars and shopping.  (Why doesn’t Ikea let you order online?  Anyone?)  So, I had settled for flipping through their catalog, dreaming, and wishing for an opportunity to present itself.

Then, a few weeks ago, Mimi and Pop Pop let us know that they were going to be taking a trip out this way in mid-June and would love to stop by and spend a few days with us.  And they graciously agreed to spend a day watching all three kids for us so Tim and I could make a break for Ikea.  I was beyond excited.

As the day got closer and I got more excited, I kept thinking that something was bound to go wrong and we wouldn’t get to go.  I even had a dream about getting to Ikea and then Peyton throwing up all over me while I was trying to shop.  Anyway, the week before we were supposed to go, Tim got a last minute email saying he had to go out of town for a week and would be leaving the next day.  Besides the fact that I was overwhelmed and stressed with having to take care of the kids alone for a full week, I just kept thinking that he better get home in time to go to Ikea with me, or someone was going to have another thing coming to him.  To spur myself on through the difficult times while Tim was gone, I just kept reminding myself of my big reward when the week was over : a shopping trip to Ikea!    (And let me just say that with the week that I had around here, I deserved a giant shopping spree to Ikea!)

So, I made it through my week alone, Tim came home on Tuesday and the grandparents arrived that same day.  Our plan was for me and Tim to go to Ikea the next day.  I was counting down the hours at this point.  Then wouldn’t you know it, around 3 or 4 a.m. on Wednesday morning, I woke up and felt horrible... major headache, sore throat, and body aches.  Nooooo!   All I could think was that I was going to miss my one chance to go to Ikea.  As I tossed and turned the rest of the night and into the morning, I kept going back and forth in my mind on whether I could just tough it out and go anyway.  I thought that maybe once I got up and got going or ate something that I would feel better.  No such luck.  I was miserable.  I knew it would be ridiculous to try to go.  So instead of taking our getaway trip to Atlanta, Tim took me to the doctor.  I had strep throat.

Pop Pop had a doctor’s appointment on Thursday and I spent the day taking my medicine and recovering.   Then Mimi and Pop Pop so sweetly offered to stay an extra day to watch the kids for us so Tim and I could go to Ikea on Friday.  Yay!!

We had so much fun together.  It’s very rare that we get chances to get away without kids.  And there’s really no way we could have taken the kids shopping in Ikea with us.  We literally spent HOURS shopping.  We came home with our van loaded down with Ikea furnishings.

One of my favorite things we bought was this shoe cubby. 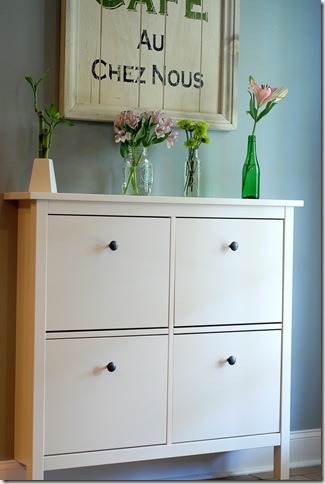 We use the back door off the kitchen all the time to go outside and play.  I don’t let the kids wear dirty shoes inside, so there were always several pairs of shoes laying around the kitchen door or right outside on the deck (or even sometimes in the yard).  I hated the constant mess, loss of shoes, and tripping hazards that this caused.  I love organization and when I saw this shoe cubby, I knew it was the perfect solution for us.  We had a blank wall right next to the kitchen door and the cubby is thin enough that the door can still swing wide open.  (We did set the door stop a little tighter just to make sure the door wouldn’t get slammed into the new cubby.) 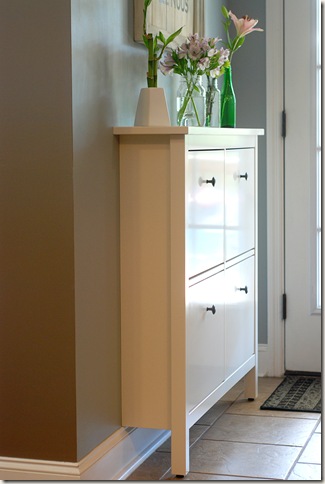 I added a few flowers on top and it brightened our kitchen right up! 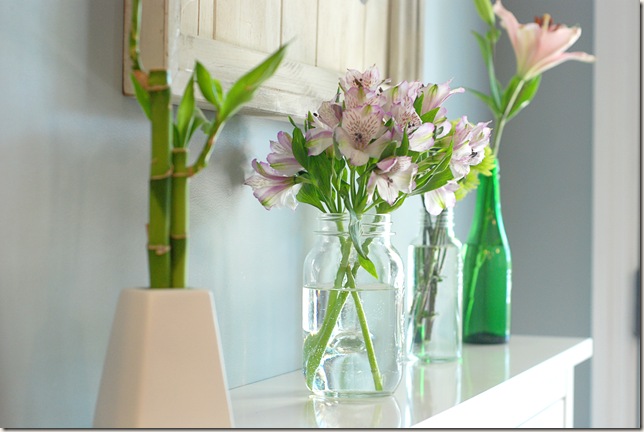 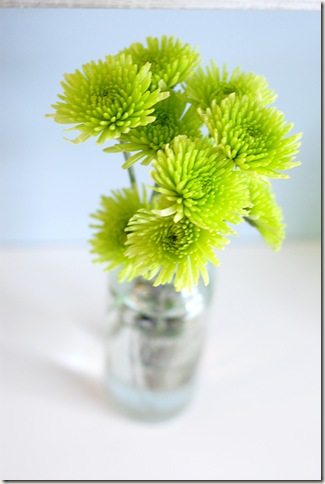