Over this past summer, due to some plumbing issues, we needed to replace the toilet in the kids' bathroom.  As usual,  one thing led to another and before Tim knew it, he was planking the walls for me.  And since he had to take everything out to plank the walls, we decided to go ahead and switch out the vanity, as well as the light fixture too.

So the kids' bathroom got a fun freshening up. 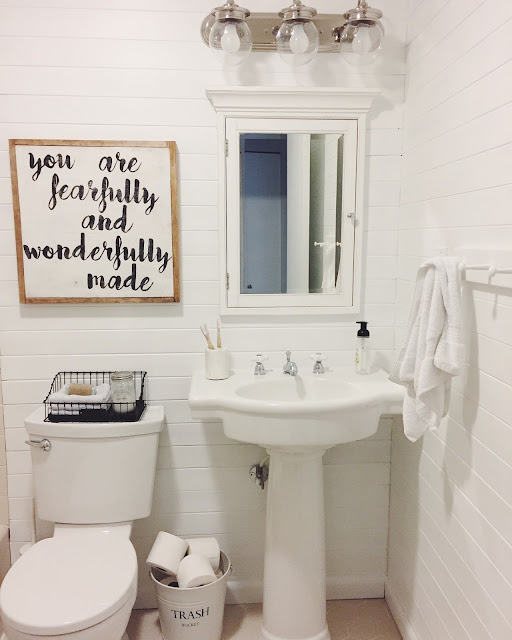 Here's a look back at what the bathroom looked like when we moved in.  So much tan and brown, I couldn't take it! 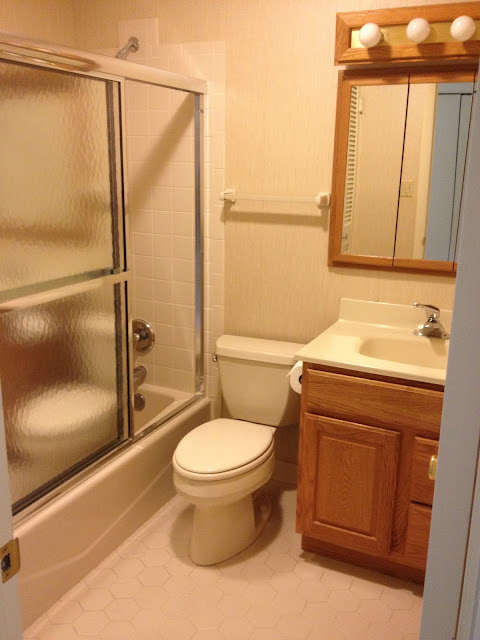 So not too long after we moved in, I tore down the wallpaper and the shower doors and gave it a fresh coat of paint.  We also updated the vanity, the medicine cabinet, and the light fixture, but we left the toilet, the floors, the tub and surrounding tiles alone because we weren't ready to jump into a major renovation. 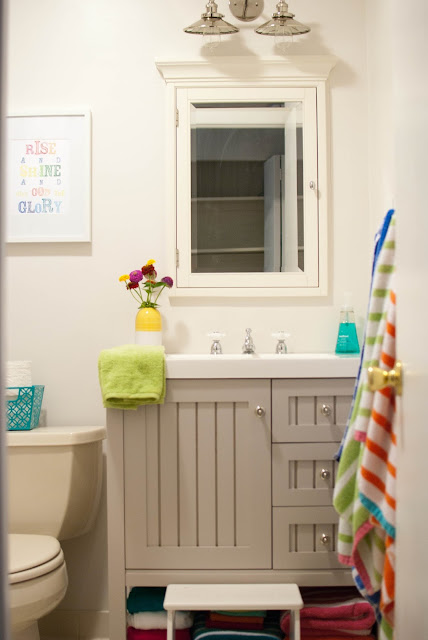 It was definitely much better (and very colorful too!).

But after living with it this way for a few years, we realized some of our choices weren't working in there as well as we thought they would. Live and learn! For one thing, the vanity was really too big for such a tiny bathroom.  It made the already small space feel even more cramped.  And it wasn't holding up very well either.  Tim had already had to fix a drawer that had come loose and the paint had also started chipping and bubbling up in places.

I had the hardest time settling on what to replace it with though.  I really wanted a wall-mounted sink, but finally decided one wouldn't be very practical for us right now.  I also looked at smaller vanities, but just didn't find one that I loved.  Plus I wanted the bathroom to feel very open and airy and I didn't think I could get that feeling with a vanity.  So I ended up going with a pedestal sink, which originally was not even on my radar.  But it has opened up the bathroom so much.  I made sure to get one with space on both sides of the sink so the kids could sit their toiletries on it.  And I chose one that feels a little bit vintage, rather than sleek and modern.  We already had the medicine cabinet to hold things like toothpaste, a brush, hair gel, etc...   I just gave it a fresh coat of white paint to match the walls.  And there are some open shelves on the other side of the bathroom to hold baskets of things as well as the kids' towels. 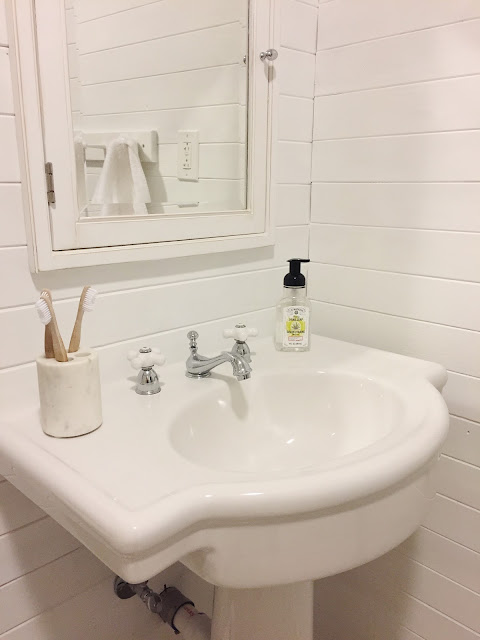 The other thing we'd come to realize was that the light fixture we originally put in the bathroom wasn't nearly bright enough.  This bathroom doesn't have any windows, so it's important that our lighting be very bright.  The light we had in there only used two low wattage light bulbs and since the top of the light fixture was covered it also blocked much of the light from spreading out around the room.  So this time around, we bought a three-bulb light fixture with open glass so that the light could really brighten the entire bathroom.  It's so much brighter now.  We can finally see! 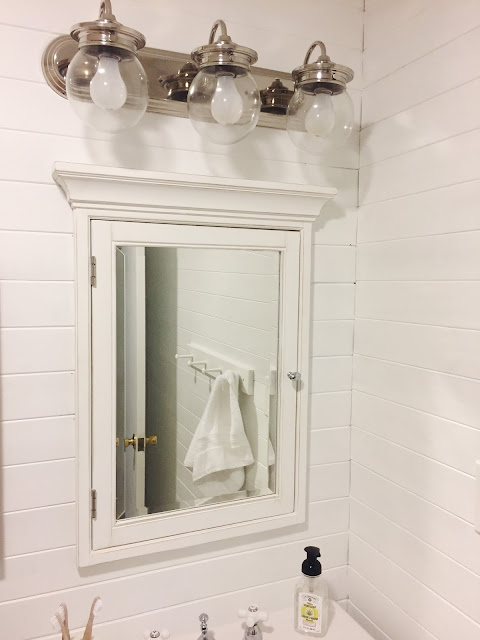 I painted the sign and Tim made the frame for it.  For when self-esteem and body insecurities become a battle, I just wanted a big reminder that they are fearfully and wonderfully made. 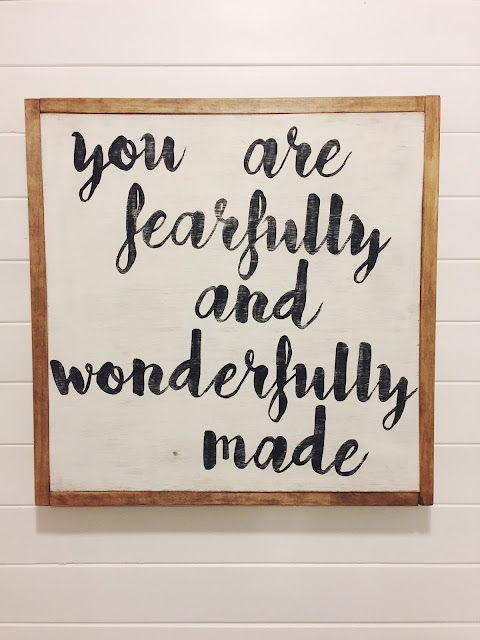 I found this little bin at Magnolia Market to store washcloths and other little bathroom things. 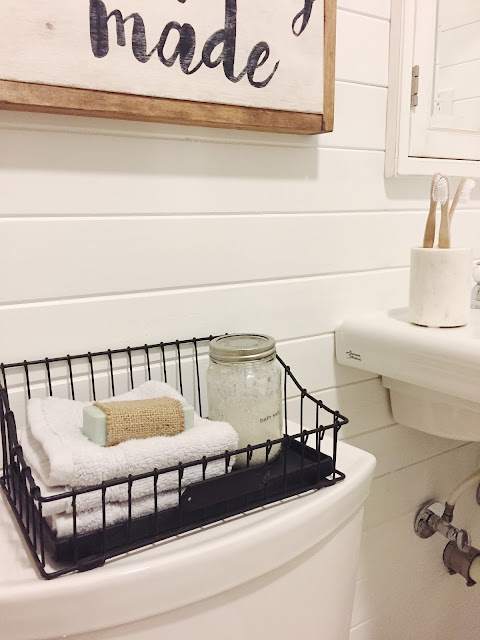 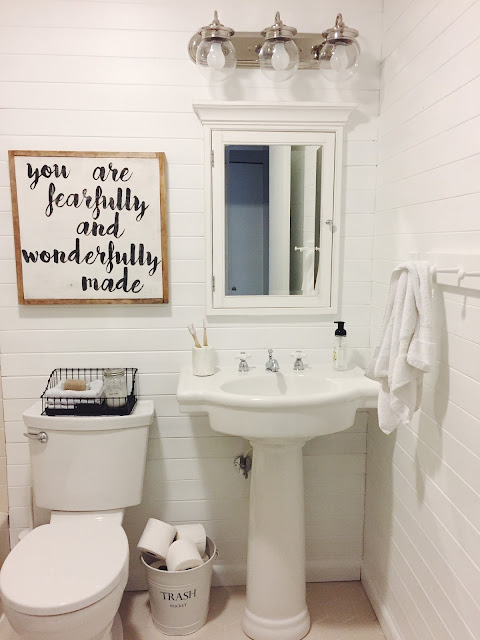 It will be nice when we eventually get the bathtub, surrounding tiles, and floors re-done, (they're all the original almond color) but for now, we're really enjoying this update.