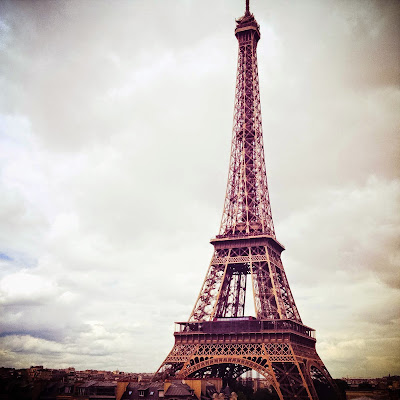 So… I made it! The trip here was not exactly smooth sailing though. Just as we were pulling out of the driveway to drive to the airport, the skies opened and began pouring down lightning, thunder, and rain  So if I wasn’t already anxious enough about leaving my kids and flying to Paris, the rainstorm and the resulting slower and heavier traffic on the interstate didn’t exactly help. But we made it to the airport safely and on time. After Tim’s dad dropped me off, I was on my own. If I wasn’t absolutely convinced that God had ordained this trip for me, then I would not have gone, but I’m learning to trust, to risk, to take adventures with Him. Still, I was nervous and stressed. I am not much of a traveler, so airports can feel like a maze to me, but I asked questions and followed the crowds and the signs and eventually made it to my gate. Then we found out that our plane (that we were supposed to fly out on) had to land at a nearby airport because of the nasty weather. So their little detour ended up delaying our flight by 3 hours as we waited for them to refuel, take off, and get to our airport. My flight didn’t leave until about 12:30 a.m, instead of 9:25 p.m. After that it was an almost 8 hour flight to Paris. It was a long, uncomfortable, mostly sleepless night on the plane.

Once I got to Paris, I made my way through the airport, through customs and then to baggage, hoping to see Tim on the other side. But because of his work obligations, he ended up not being able to meet me there. If you’re used to flying and airports and foreign countries, then maybe this isn’t such a big deal, but I was pretty overwhelmed by all of it. A foreign country, unfamiliar territory, and me no hablo Frencho…. not a fun combination for me. So then I had to figure out how to exchange my money for Euros, get to the RER (metro/train), buy tickets, get on the correct RER, change RER trains mid-way, and then find Tim’s hotel. I don’t do these things, much less in a foreign country. Tim bought me a GPS when we moved to D.C. and I can still get myself lost. I have no sense of direction and I’m not a map person. My brain doesn’t work like that. Sorrynotsorry, it just doesn’t and I can’t help it. So I will just say, it was all Jesus that I actually made it.

When I finally found the hotel and Tim, I was on the brink of an emotional breakdown… tired, hungry, cranky, overwhelmed, emotional, missing my kids, and exhausted from the traveling. I had all the feelings. So he took me to Starbucks. A little taste of home, something familiar, and that made things so. much. better. I was new again. 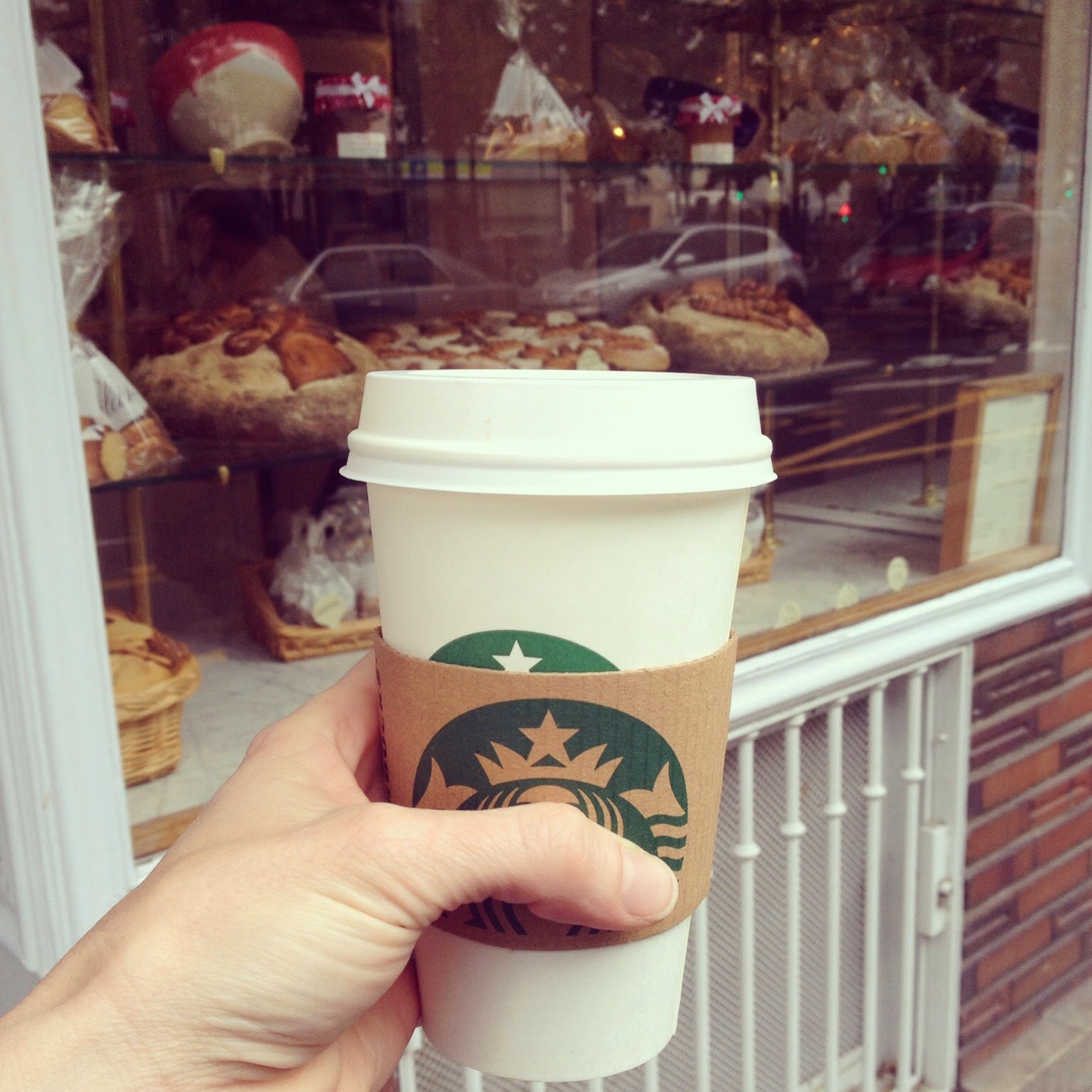 That night, we walked through the beautiful streets of Paris and ate dinner at a local café. The food was rich and delicious. 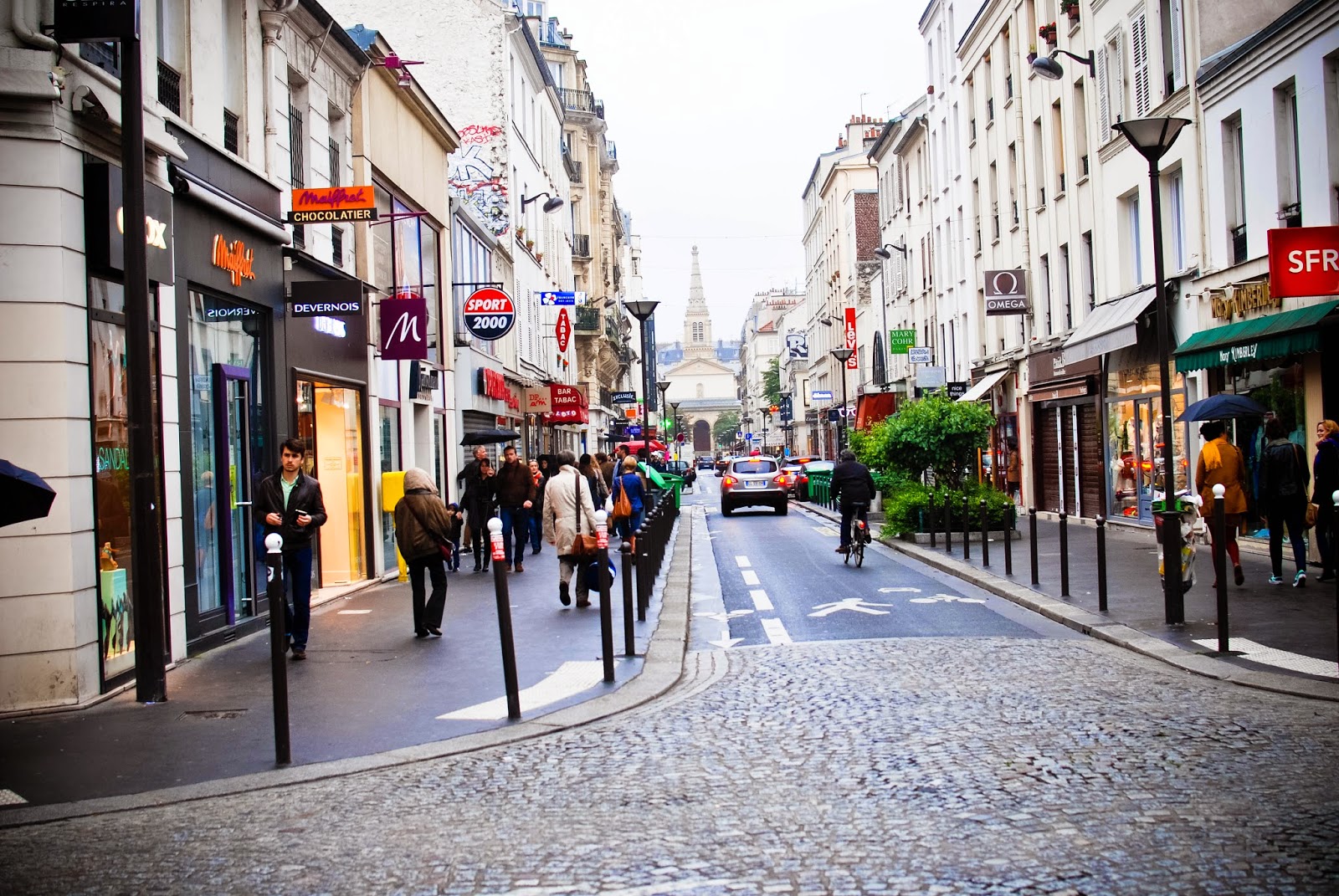 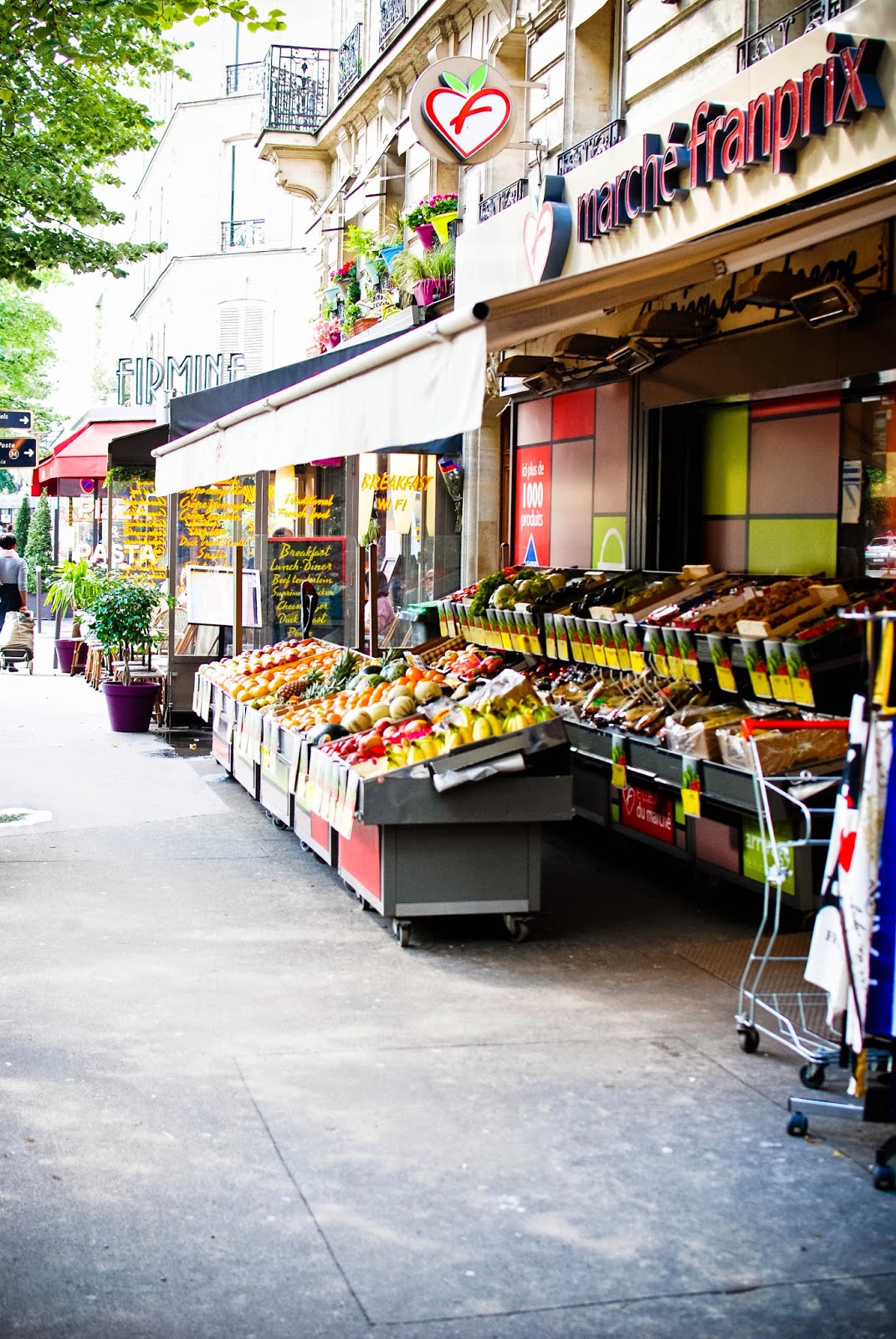 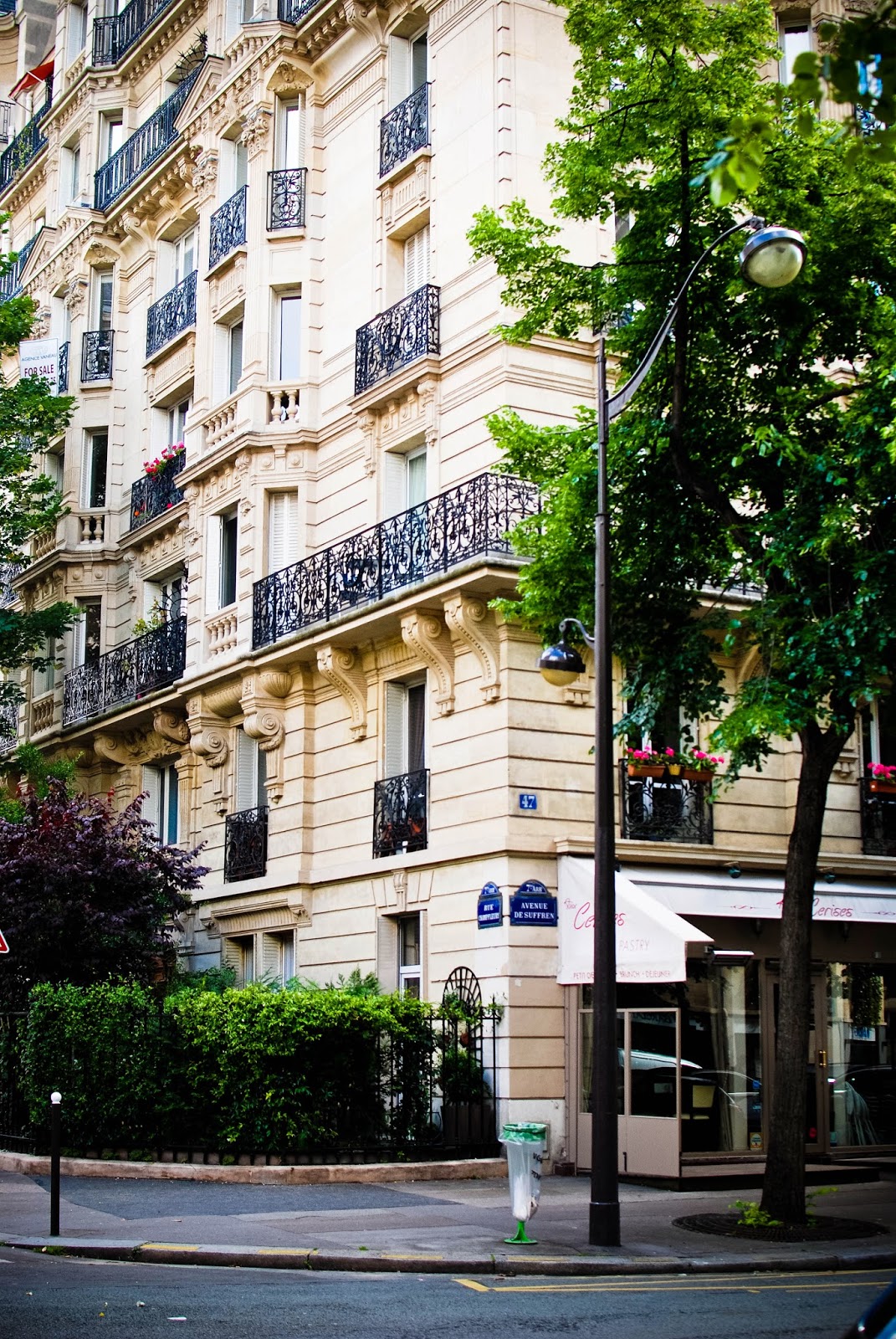 It was drizzly, but we walked down to get a better view of the Eiffel Tower. 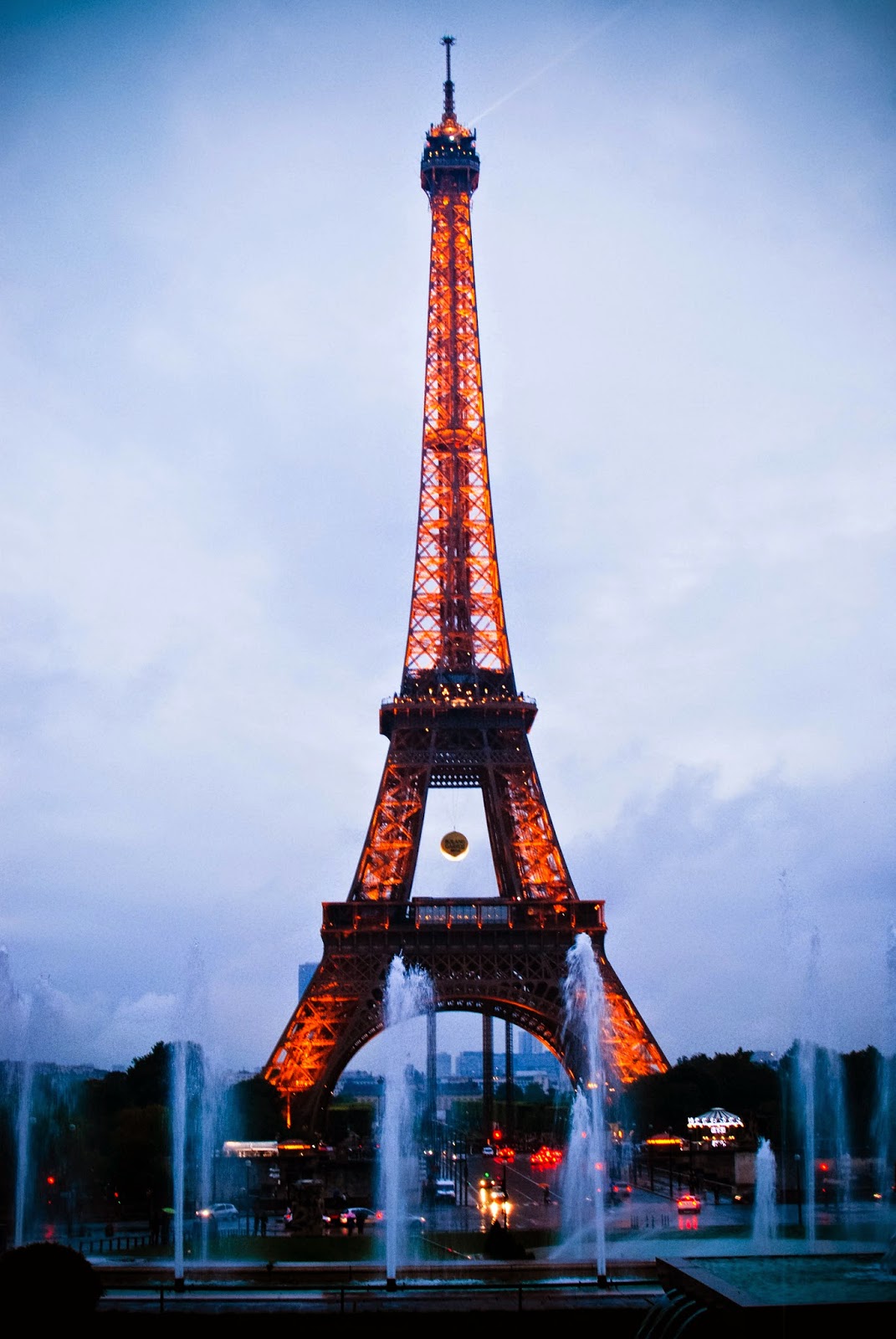 A great thing about our hotel is that it’s very close to the Eiffel Tower. I took this picture from the top balcony of our hotel. 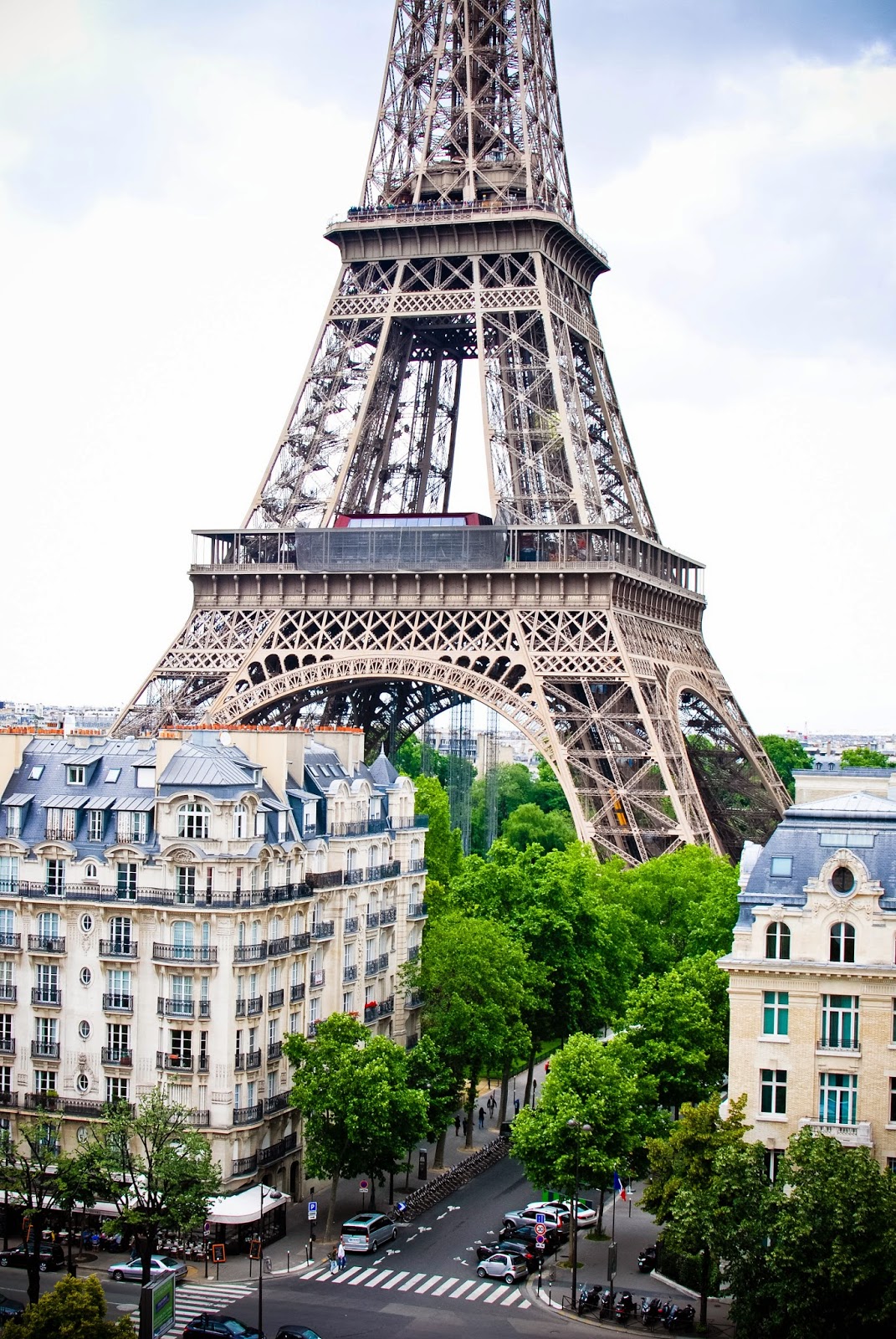 At night, it lights up. And every hour on the hour, it sparkles. 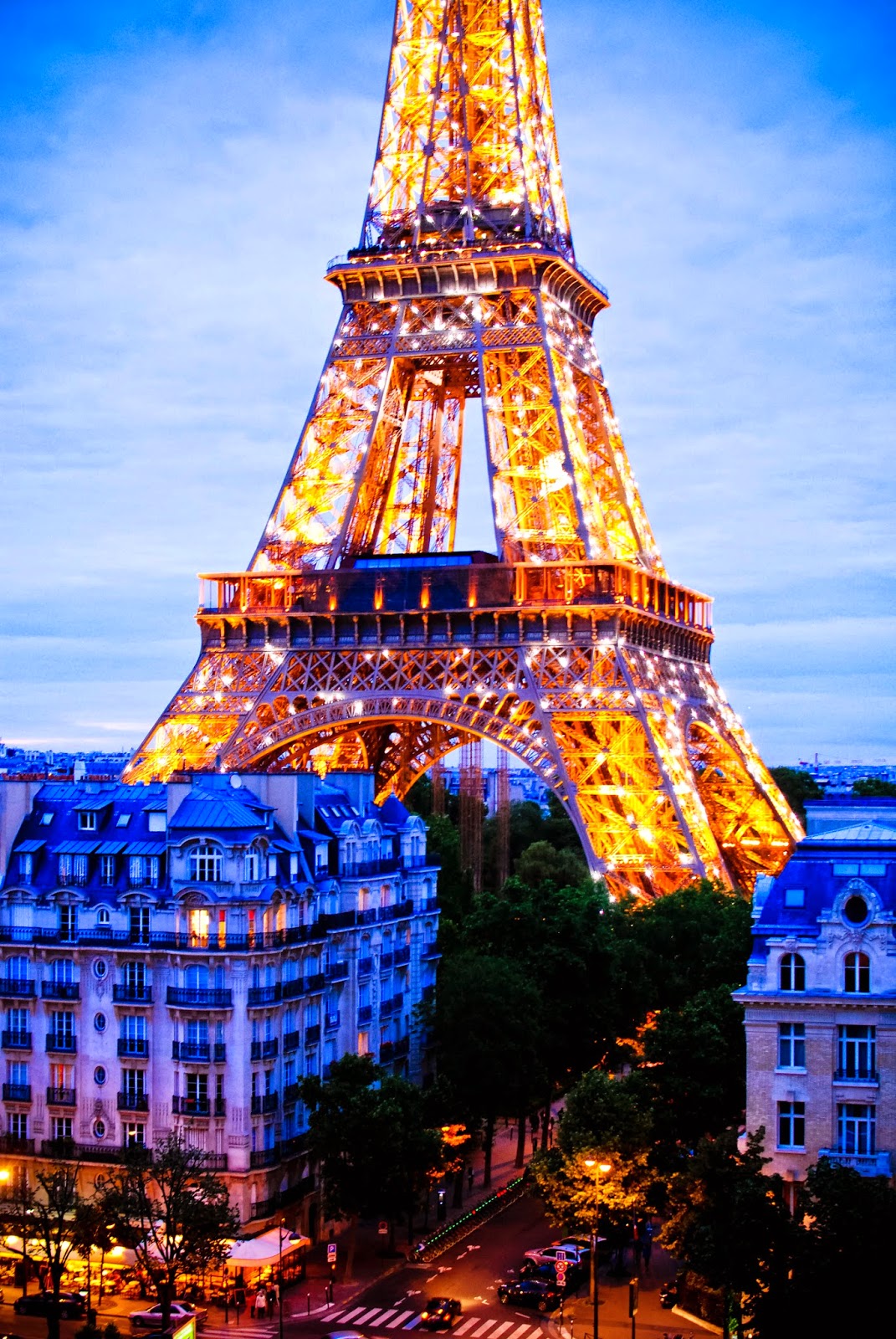 And it is completely massive. 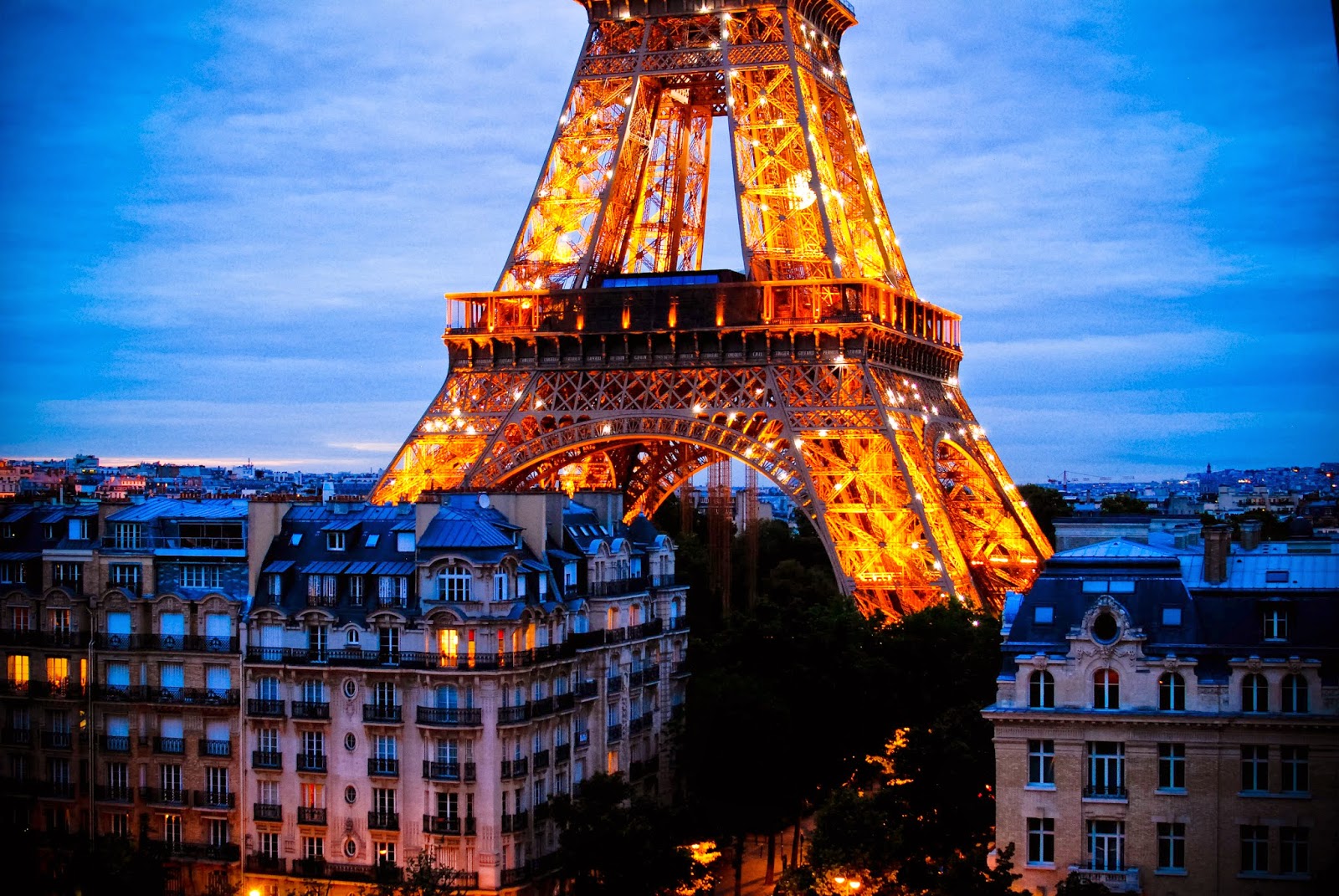 Our room doesn’t face the Eiffel Tower though. At first, I thought I would be disappointed about this, but I actually love the view from our balcony. The buildings we face are beautiful to me. The old architecture, the flowers on the balconies, the brick chimneys, and dark shingles…I just love it all. 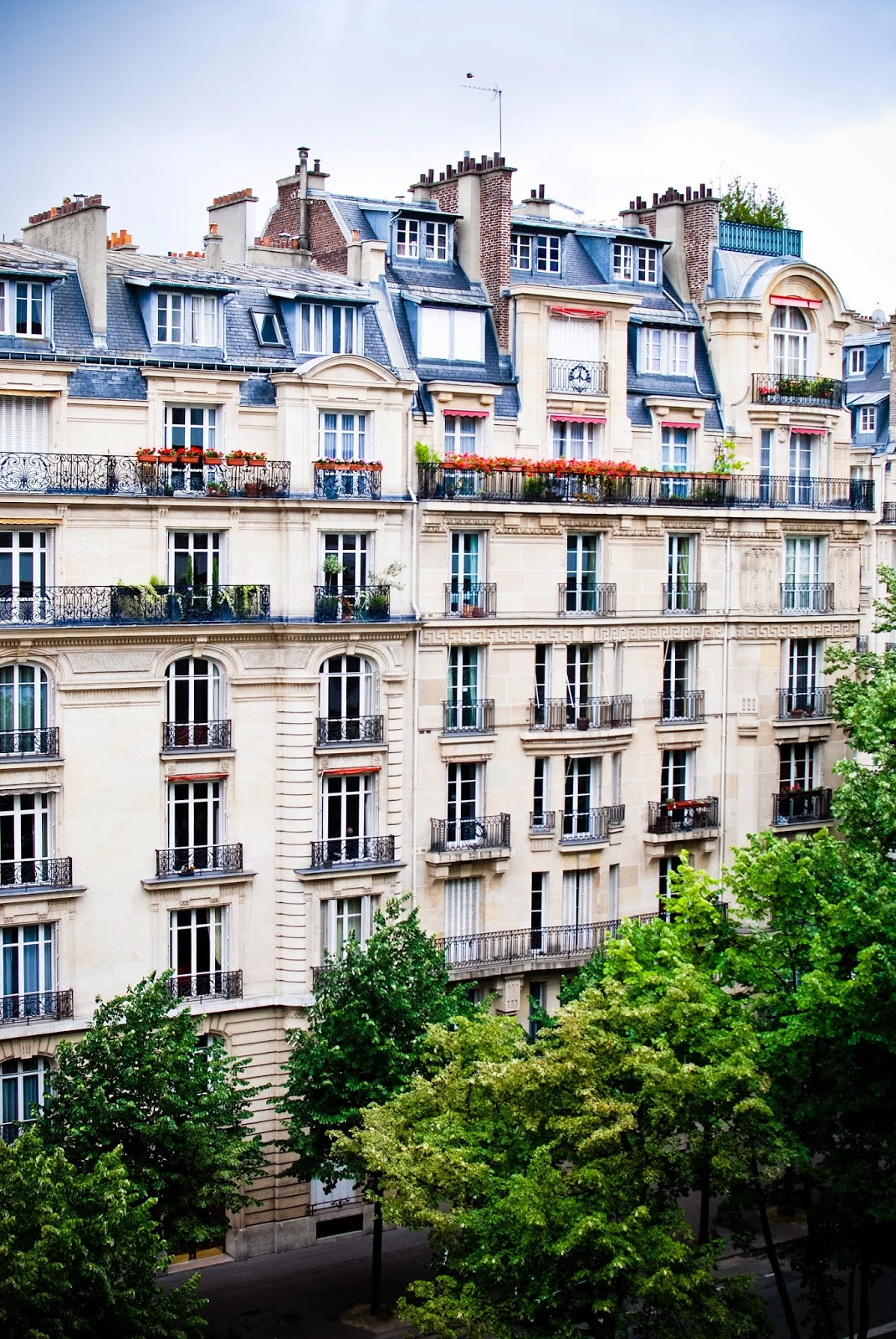 And there is a quieter, tree lined street below. I’ve been enjoying just sitting out on our balcony, watching the cars, the buses and the people go by. Even as I type, I’m sitting out here on our balcony and a horse drawn carriage is clip-clomping past, along the street below me. It’s perfect and peaceful.

On my first morning here, Tim had to work, so I walked down to a small bakery, bought a croissant and an Americano coffee. (We’re learning that the French like their coffee much, much darker and stronger than we do. They drink little tiny Espressos. So when you order an Americano, you’re basically just ordering a watered down Espresso… not exactly my favorite. I’ll take a little bit of flavored coffee with a lot of half and half and fake sugar please. Since that’s not really an option here, we mostly just go to Starbucks.) Then I walked over to the Champ de Mars and sat at the park and people-watched and thought and prayed and journaled and enjoyed doing nothing and not being in a hurry. 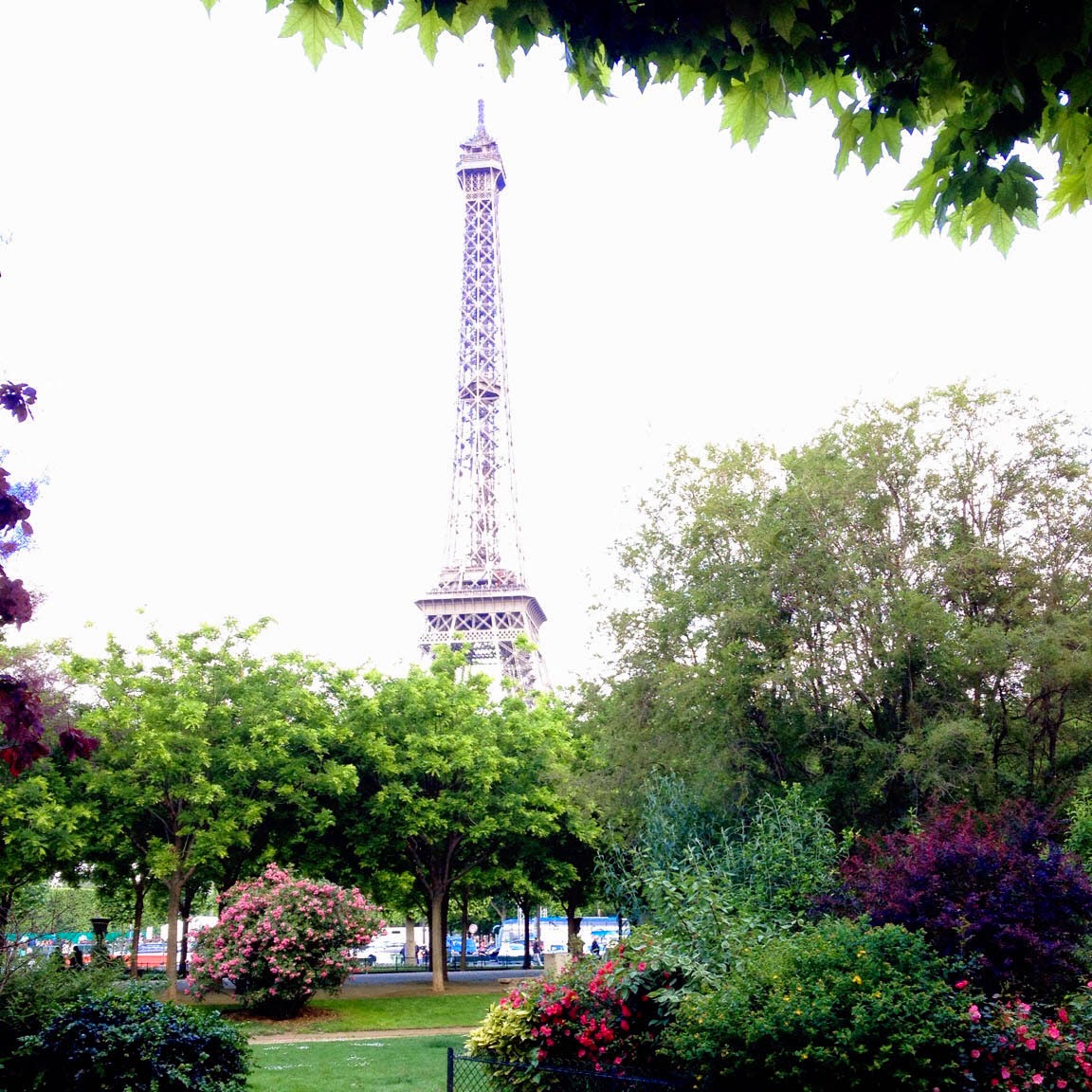 That afternoon, Tim and I decided to walk along the Seine River and see the sights. 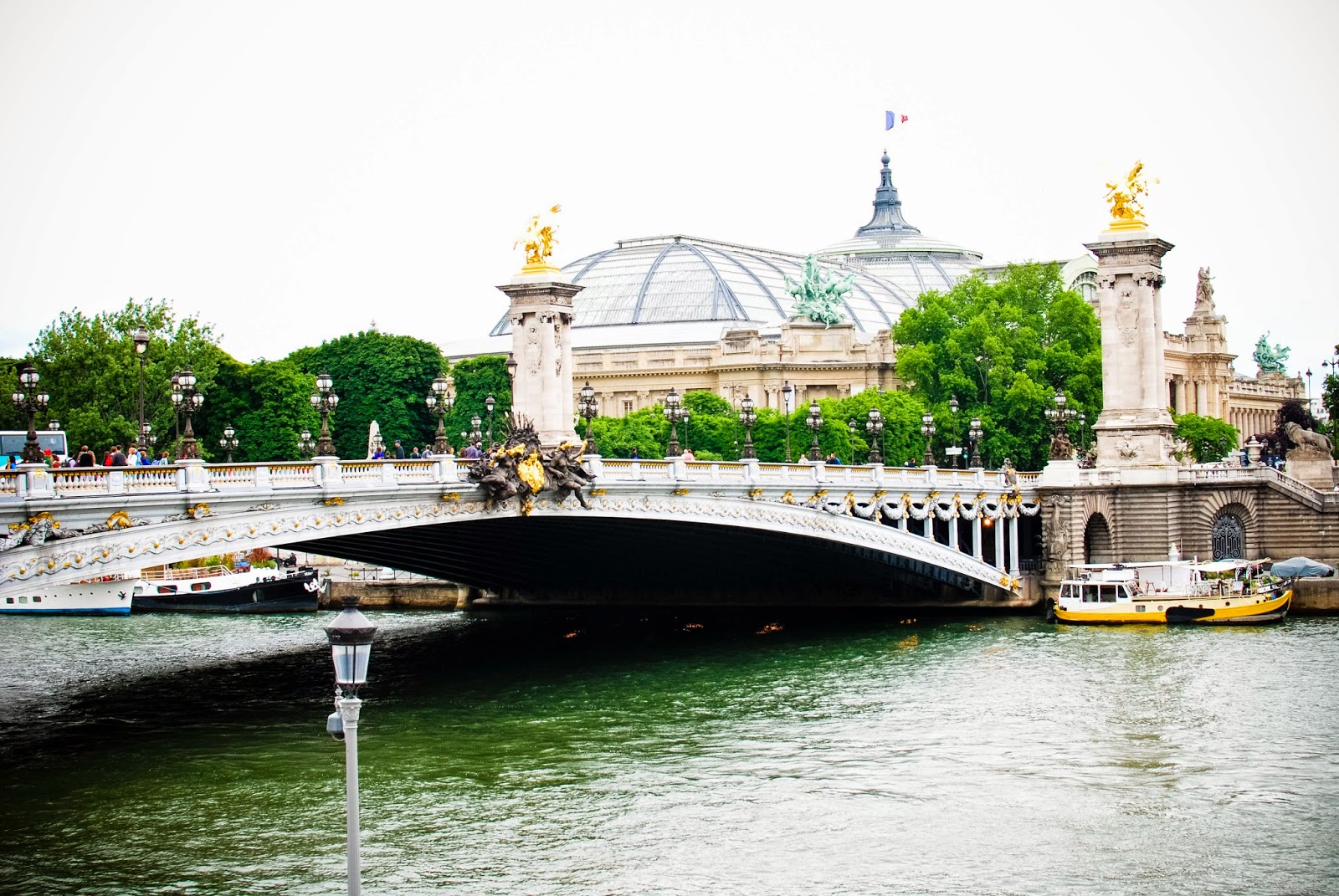 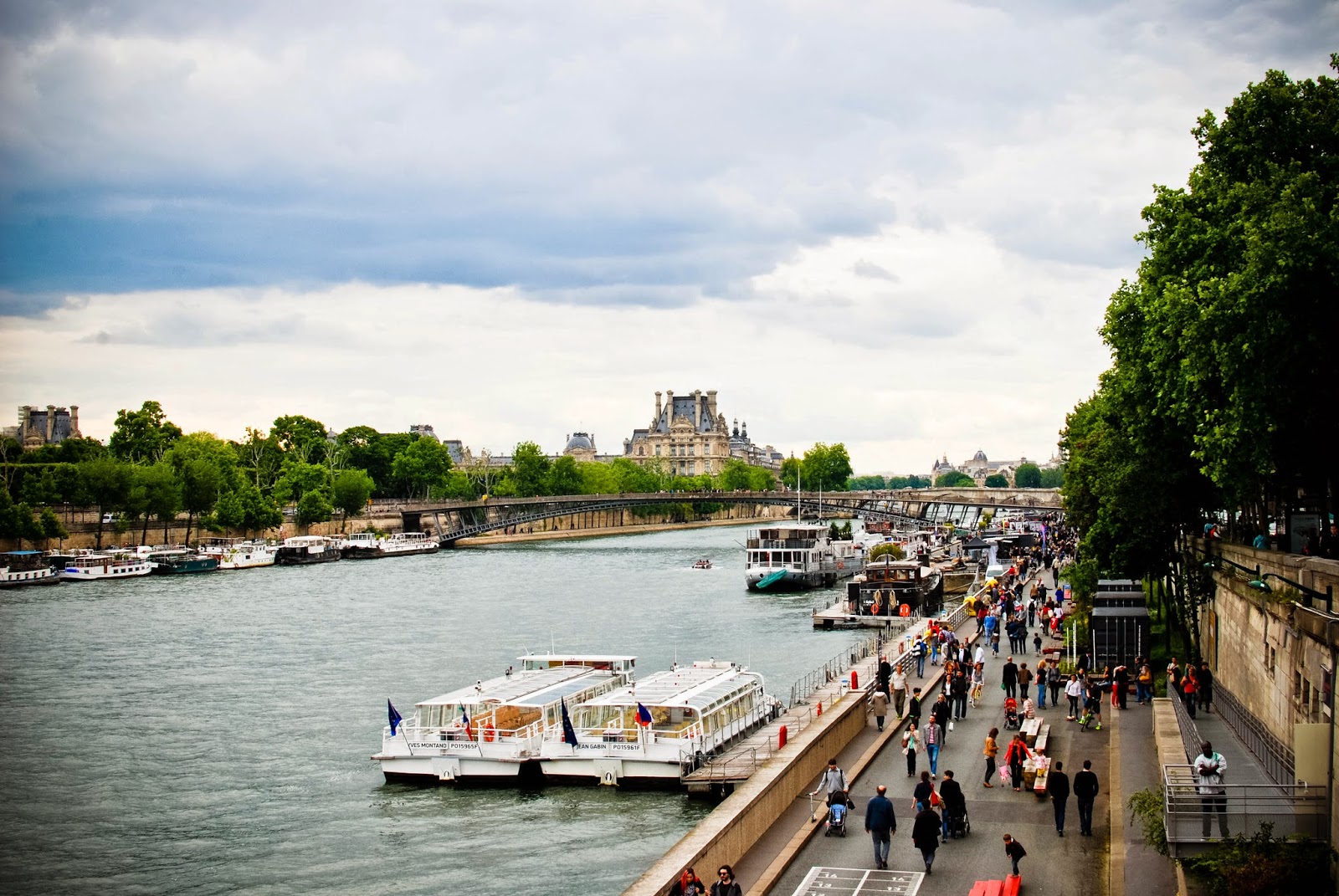 We walked for miles upon miles, from the Eiffel Tower all the way to the Notre Dame Cathedral. I believe this is the Louvre. 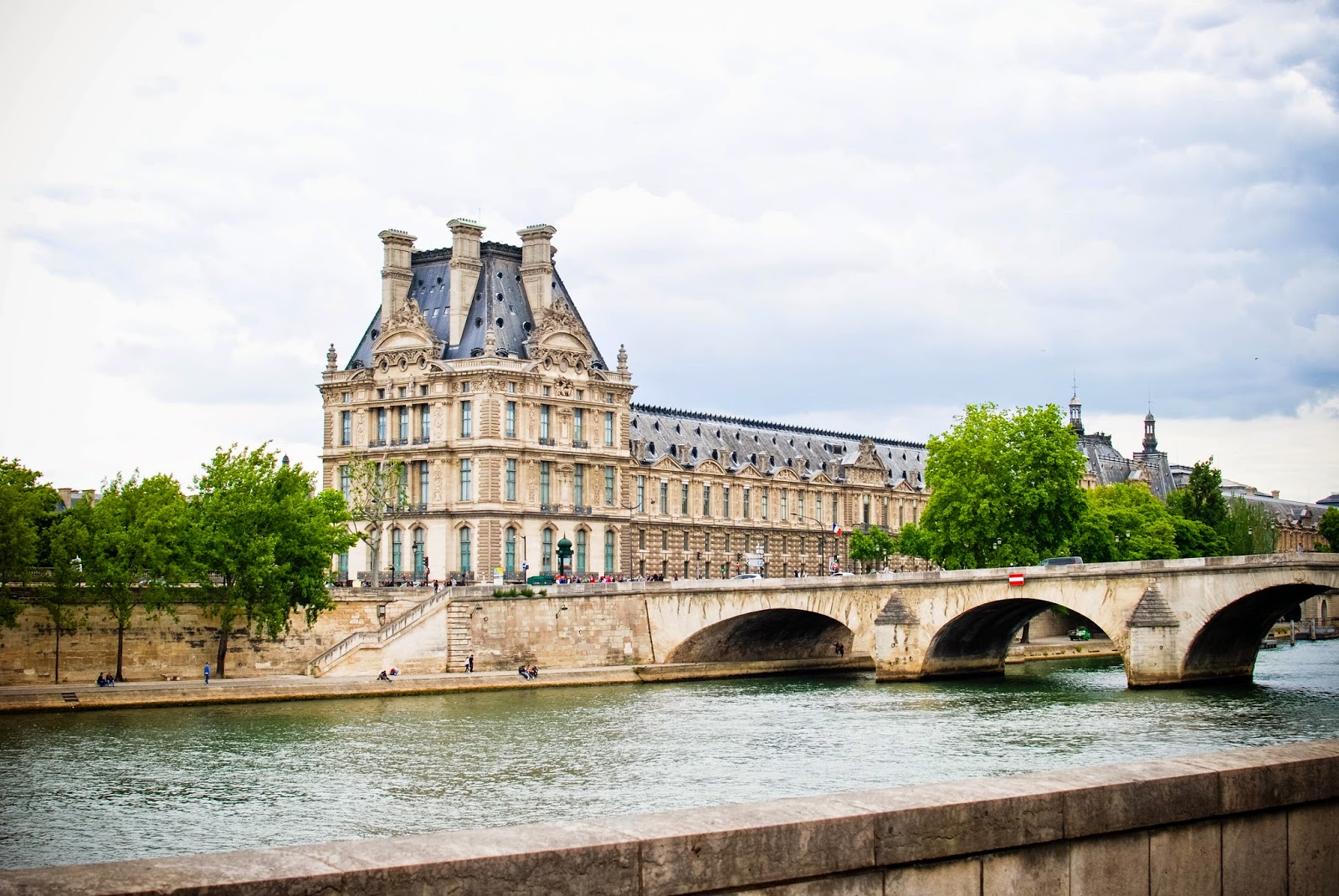 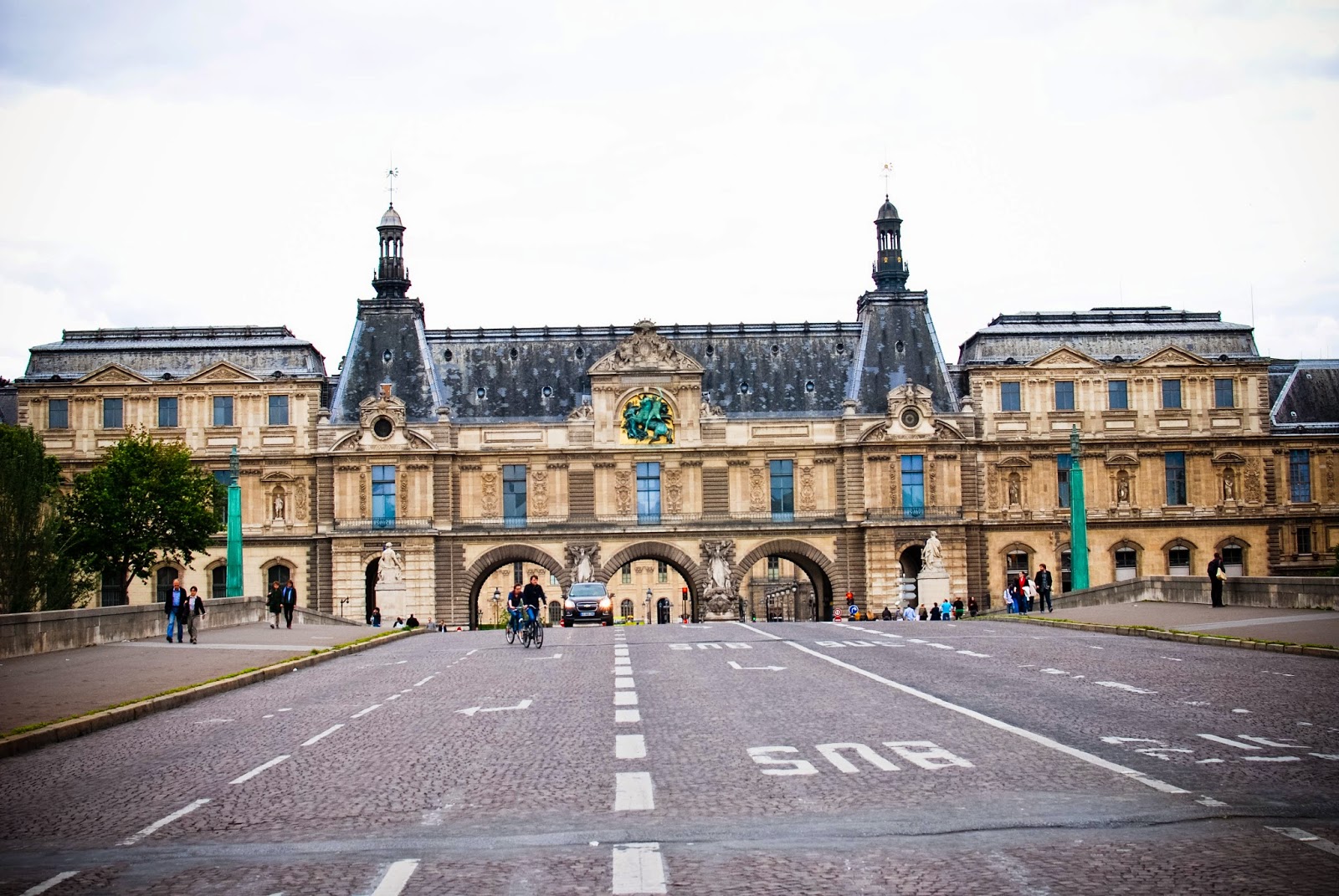 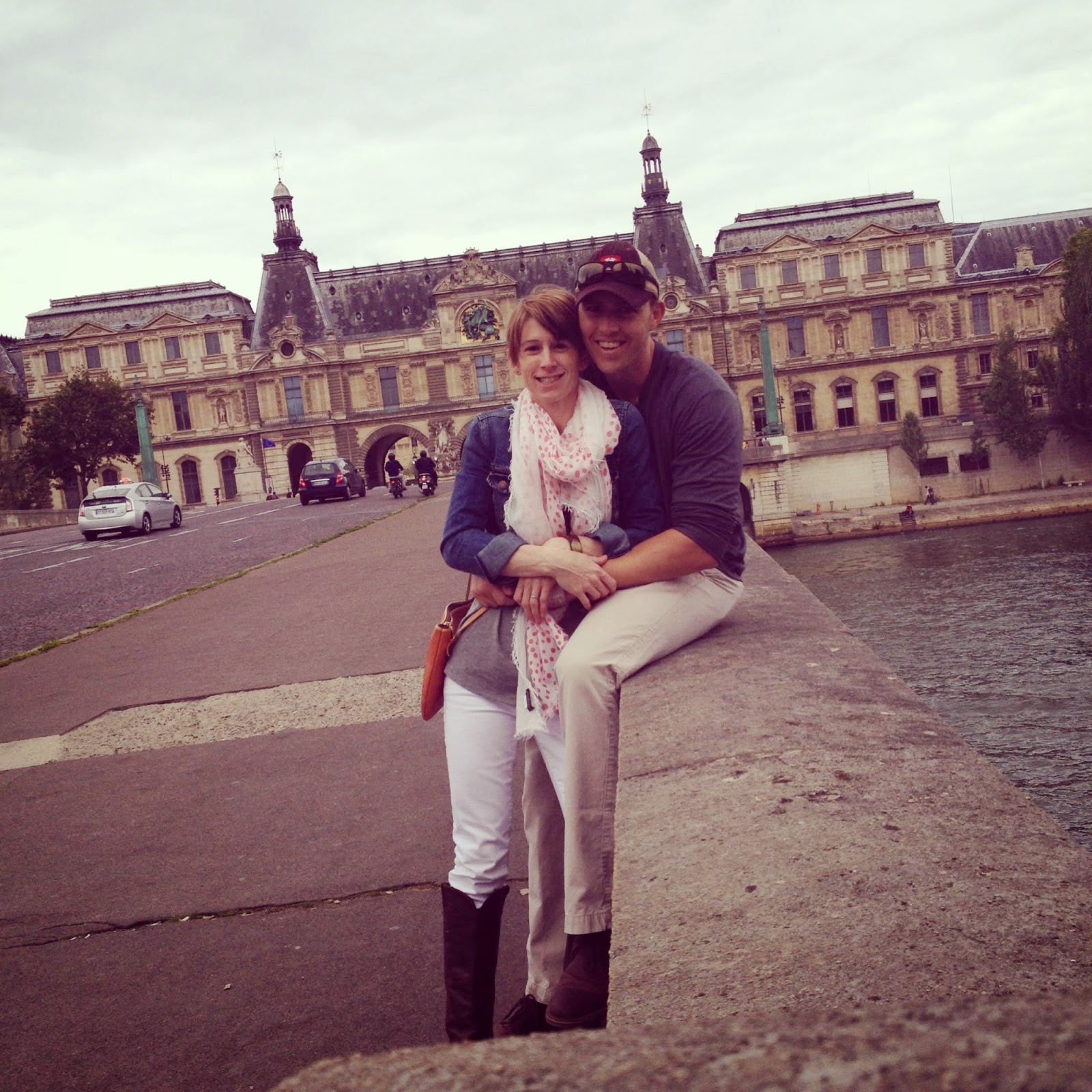 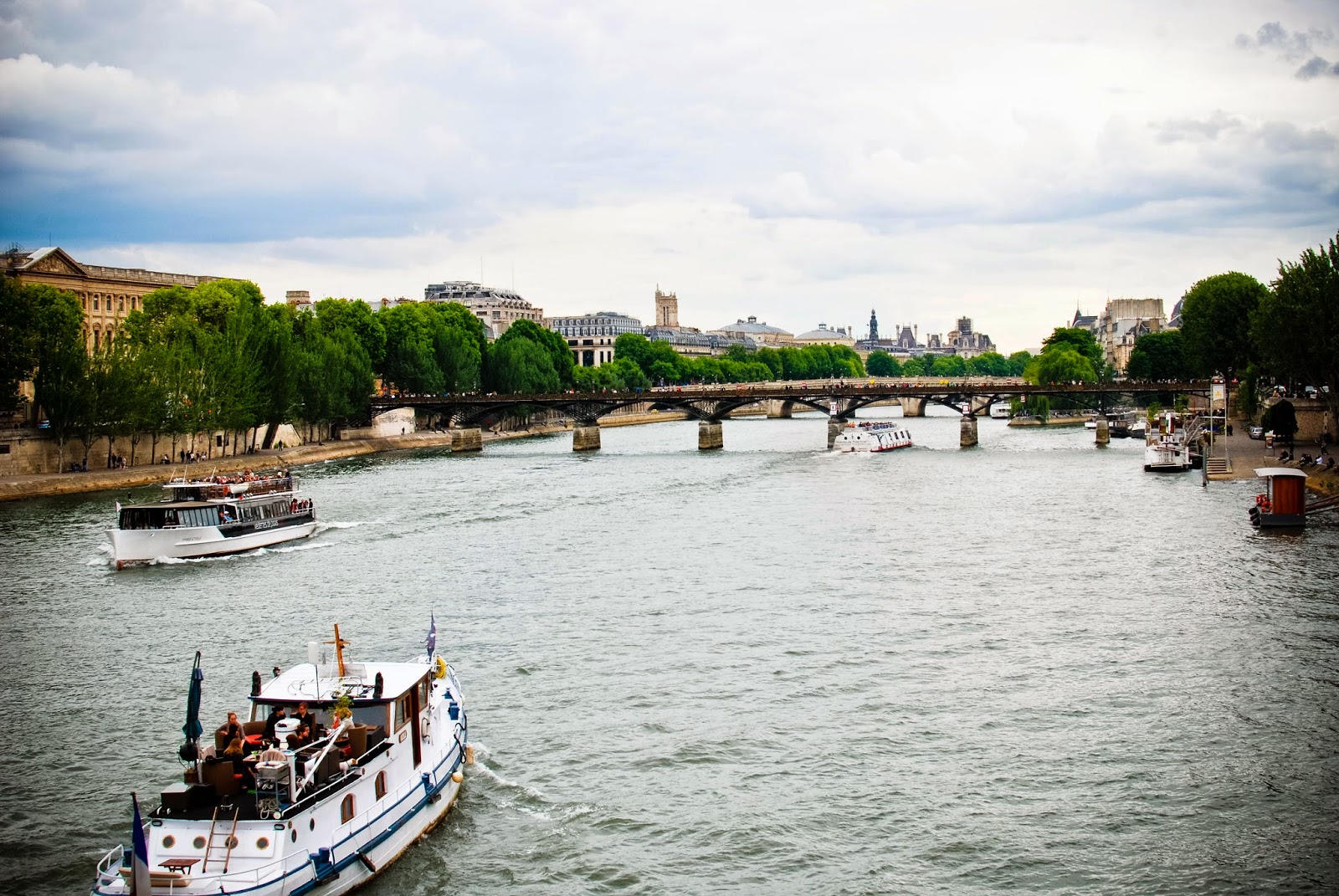 We stopped at the Love Lock Bridge and added our own Lock of Love. 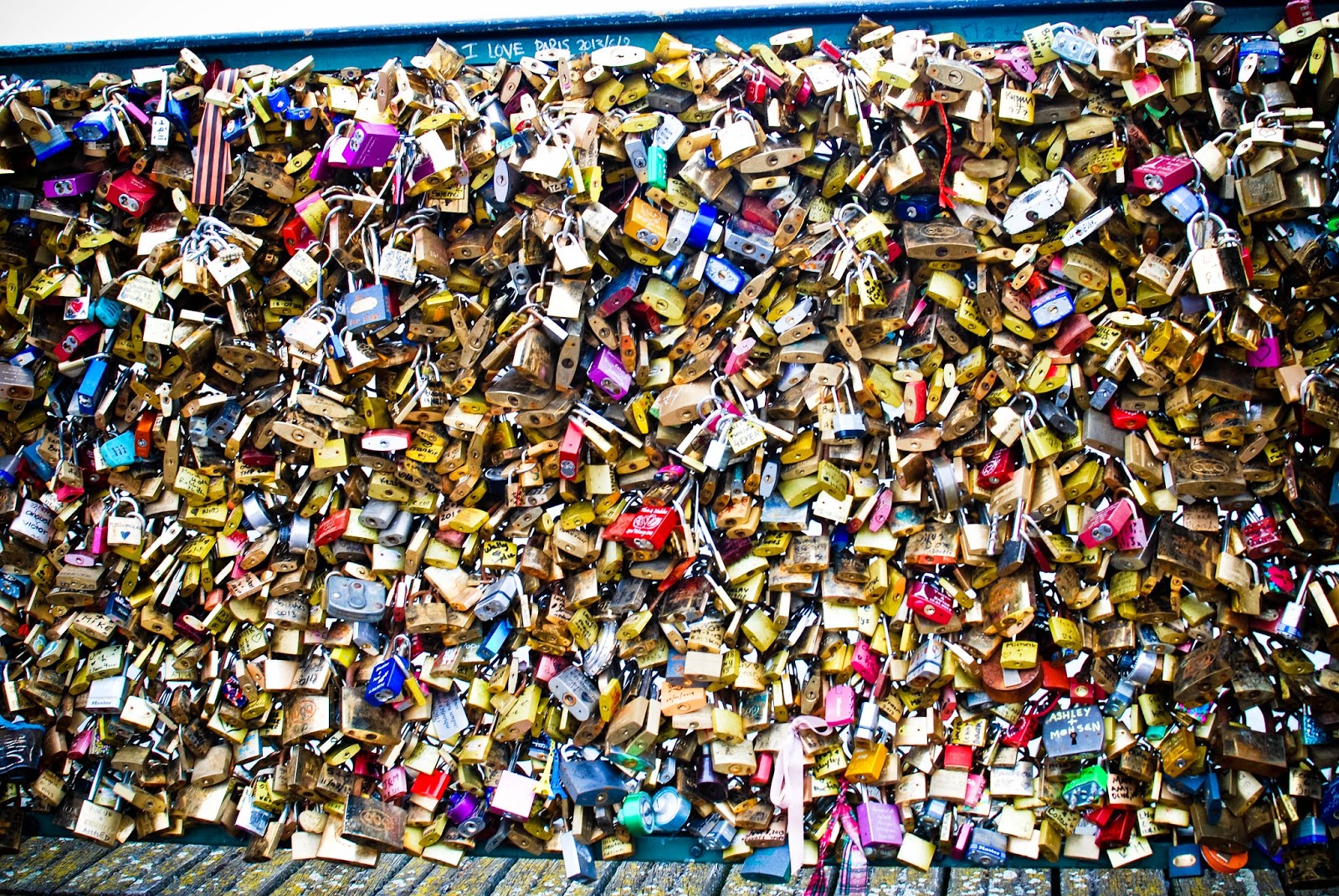 We bought a lock from a street vendor, then wrote our names and wedding date on it, and locked it on the bridge. Tim had a sneaking suspicion that the street vendors go back out and remove their locks , clean them up, and re-sell them (because the keys were the same for all the locks and the locks looked a little bit beat up/used), so Tim broke our key off in the lock (#weshowedthem), then, following the tradition, we threw all the keys to our lock into the river. And now our lock is locked on the bridge for-ever and we’re locked in love!! 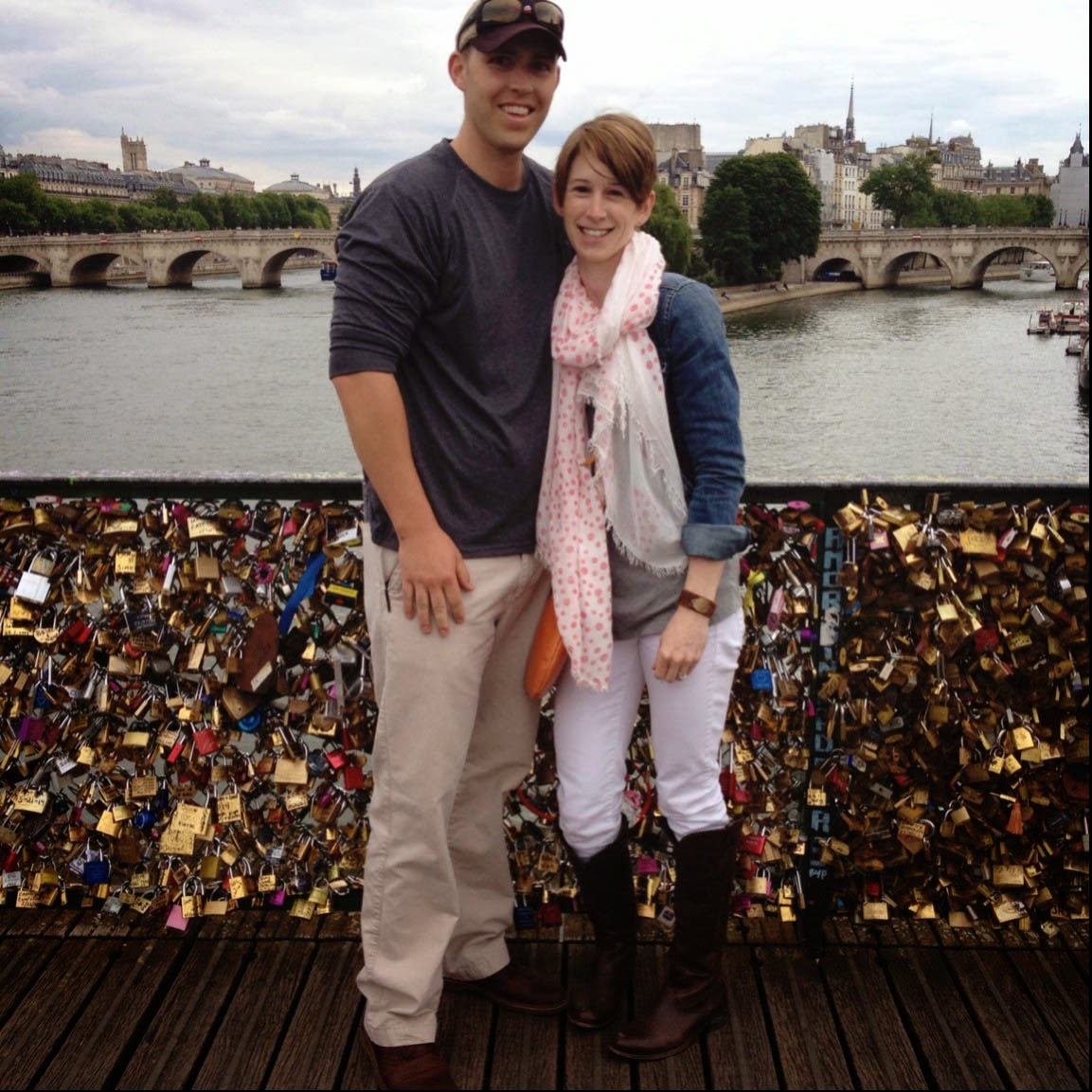 Also, while we were out walking, we bought a painting of the Eiffel Tower in the Spring from a local painter.  I love it.  It's the perfect souvenir. 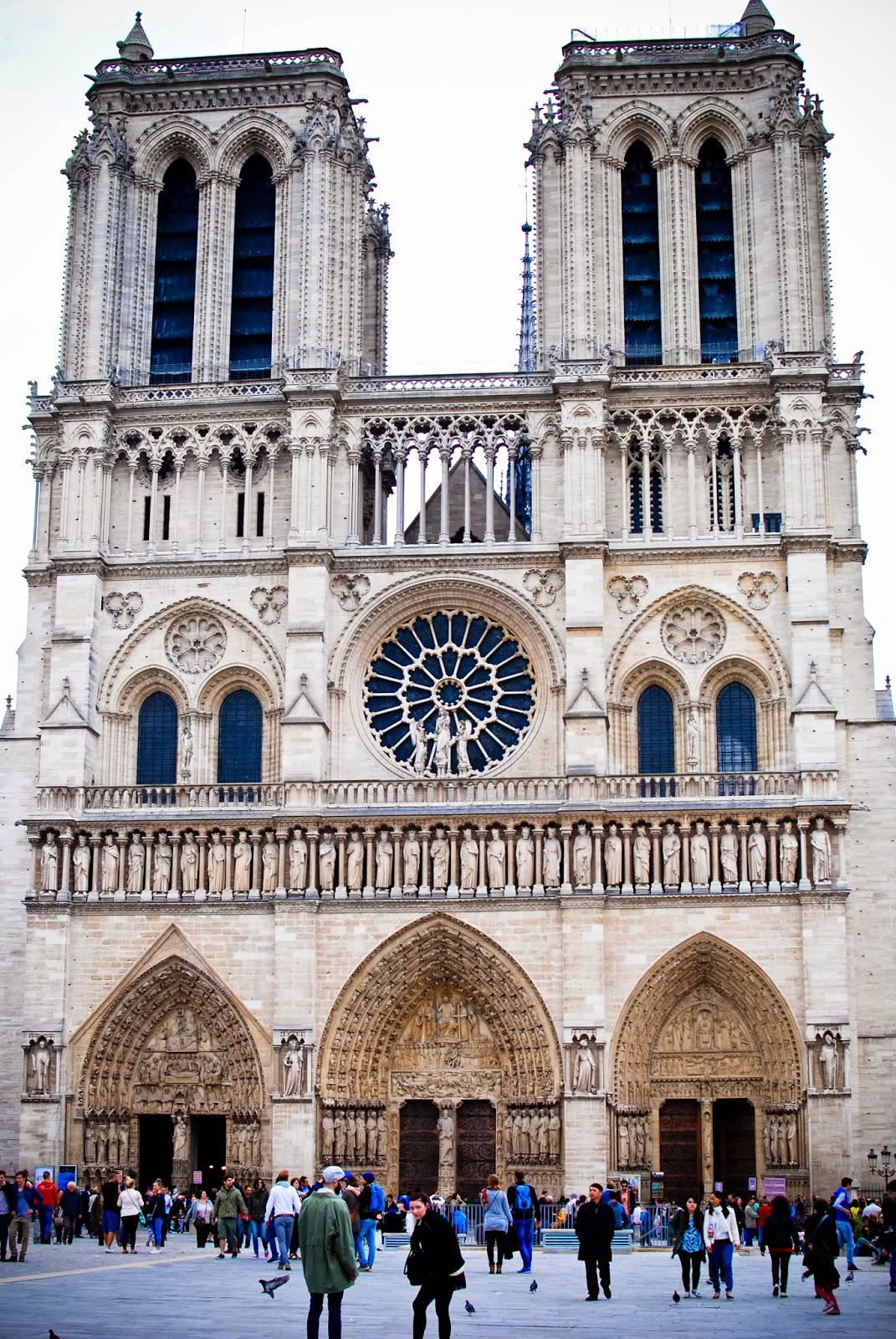 After that we ate dinner at a street café and then started the long walk back to our hotel.

Along the way, I saw this cute little street and that couple kissing makes this picture even better. So Paris! 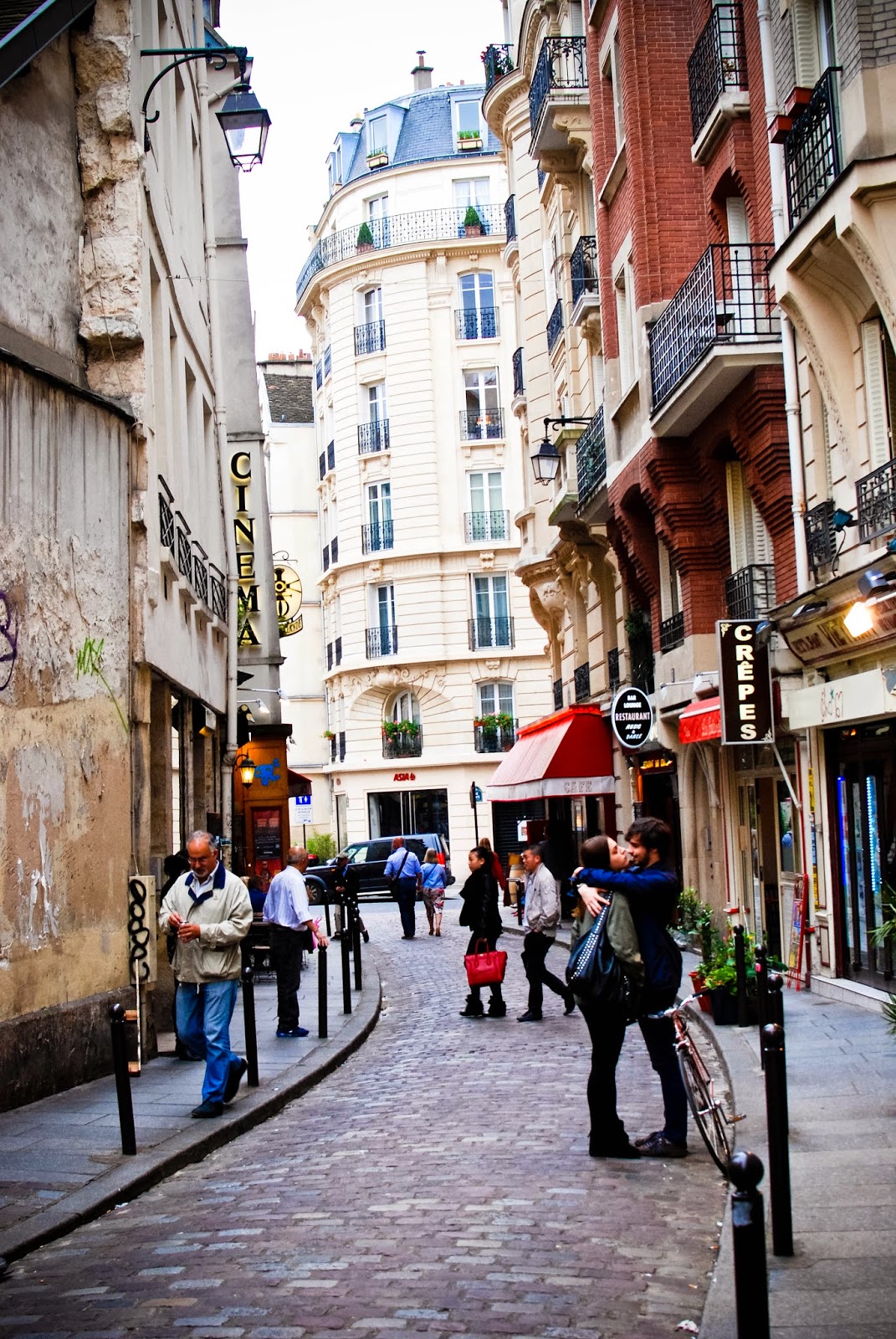 Which brings me to today. My feet have blisters and my legs ache from walking miles and miles (almost 8 miles) in my boots yesterday. I’m also tired (probably from the time change and not being able to sleep last night), so today I’m taking it easy. As much as I enjoy walking along the streets and sight-seeing, I also am enjoying resting and quiet and reading and doing nothing. At some point while I’m here, I hope to make it to Monet’s Gardens.