Since we’re on the subject of home decor lately, I thought I’d go ahead and share pictures from my recent bathroom re-decoration project.  Actually, I’m not sure it should be called “re-decoration” since it was never really decorated in the first place.  It had basically just accumulated things that we already had, but since this is the kid’s bathroom, I really wanted to make it a little more fun and colorful for them.  A big concern was that it’s located right off our main living area, so I didn’t want to go overboard with crazy kid decor or too bright wall colors.  Originally, I wanted to paint the room a light blue-green/turquoise (my new fav) color, sort of reminiscent of the ocean, but when I started painting, I quickly realized that the blue looked way too bright and out of place for a bathroom right off the living room.  It didn’t flow at all.  So, I scratched that idea and decided to paint the walls the same neutral color that is in our living room and just bring in fun turquoisey accents.

We’ve had this chair sitting in the bathroom for the last several months.  Between the kids’ baths and potty training, we needed a good spot to plant ourselves for long periods of waiting.  It was just an extra chair we had sitting around our house, so one day it made it’s way up to the bathroom and it never left.  It’s ugly and boring.  I really wanted to spiffy it up. 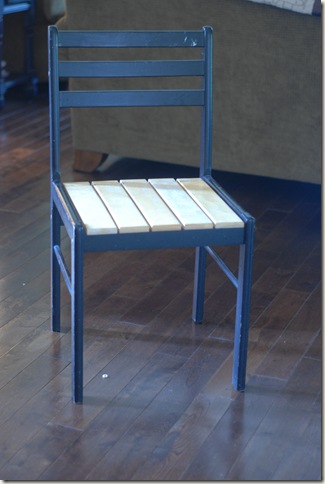 After several coats of paint and some sand paper, it came out looking like this.  It reminds me of the beach. 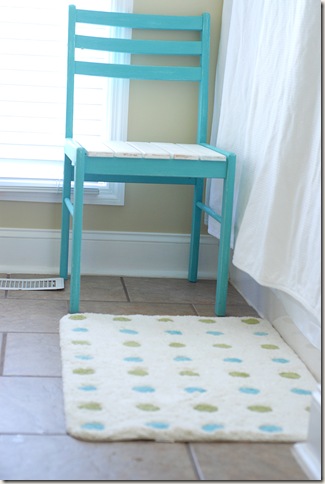 So here is the after shots of the bathroom.  I know, I know, I should have taken some before shots so you could see the improvements.  But I didn’t.  (By the way, those picture frames are also from our shopping trip to Ikea.  And the prints are from a seller on Etsy that I just love.) 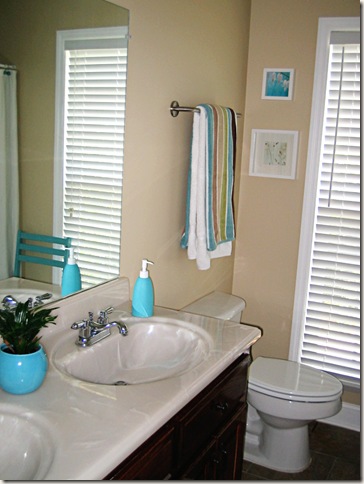 It’s fun and colorful for the kids, but not too obviously a “kid bathroom”, which is what I was going for since it’s so highly visible and also the bathroom that any guests use.  It kind of has the beachy, relaxed feel that I wanted.  I found the striped towels at Marshall’s and they were actually the inspiration for the entire bathroom.  I pulled my colors basically right off the colors in the towel.  I think that’s the easiest way to decorate a room.  Find something that you love, that you want in the room, and then go from that.  The bathmat is from Target.  I love the polka dots.  I think it’s cheery and playful, just like the kids. 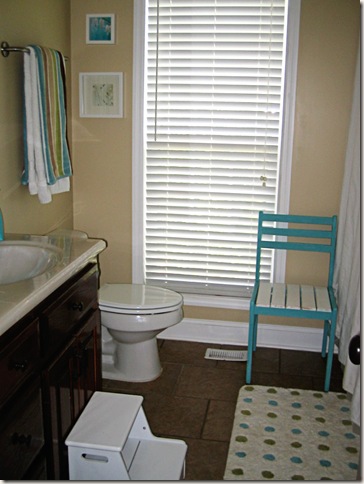 I found this guacamole colored trash can (from Target) and put it in the back corner behind the toilet.  And got the “blueberry patch” colored soap dispenser.  Both items are plastic and hopefully hard to break.  I can imagine that the soap dispenser will be dropped on the floor many times, so I stayed clear of anything glass.  And my pet peeve is when you buy a new shiny metal soap dispenser and it starts to rust right off the bat.  I’ve had that happen to me way too many times. 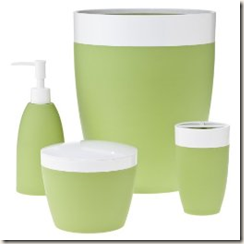 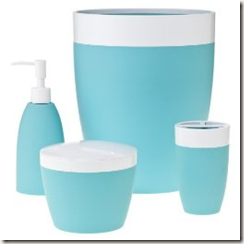 I had to get these shower curtain rings (also from Target) because they just fit in perfectly with everything else.  We already had the white shower curtain, so that was free! 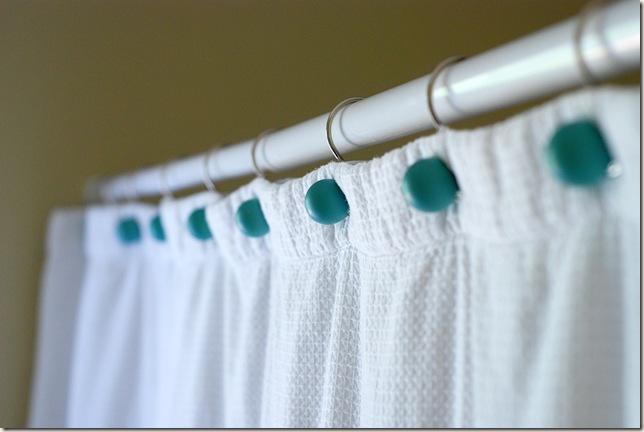 So there you have it.  Or newly decorated kid bathroom.