Decorating with shutters and crates

I’ve been on a re-decorating kick these past few weeks.  It started with making a headboard for the bed in our guest bedroom.  The bed in there is a king and king size headboards are expensive, so we’ve just never had one.  But when I saw this picture on one of my favorite blogs, I thought we could do something similar without breaking the bank. 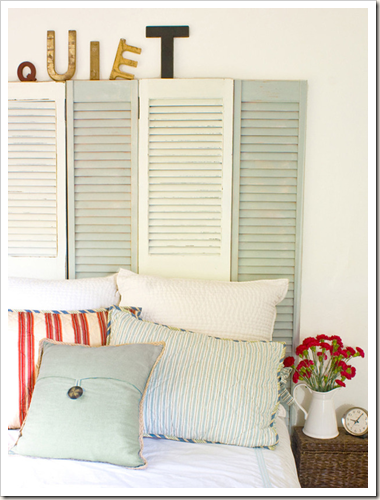 All you really need is a shutter door from home depot (we just bought one and cut it in half), some paint, some screws, and a handy husband.  Actually, if you’re handy yourself, you don’t even need the husband.  Here are the instructions if you’re interested in making your own.  I couldn’t be happier with the fact that we got a king size headboard for only about $80 bucks.  I feel like the guest room is much more put together and welcoming now. 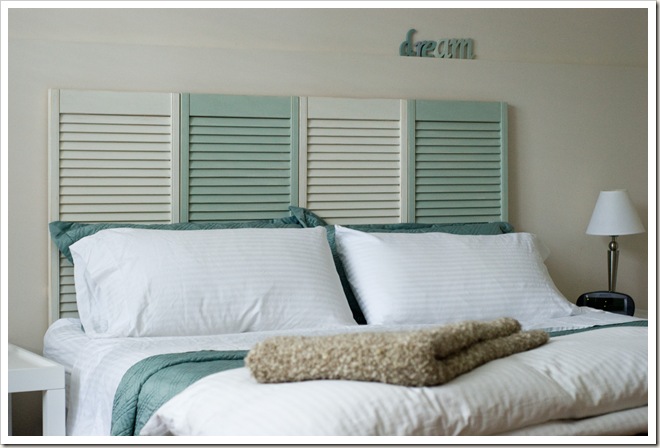 You probably know by now that I’m obsessed with old crates.  The problem is that they are hard to find and they’re expensive when you do find them.  The other day, while perusing around Pinterest (you really should check it out if you haven’t yet), I came across this picture and a tutorial on how to turn basic crates from JoAnn’s into old, interesting ones. 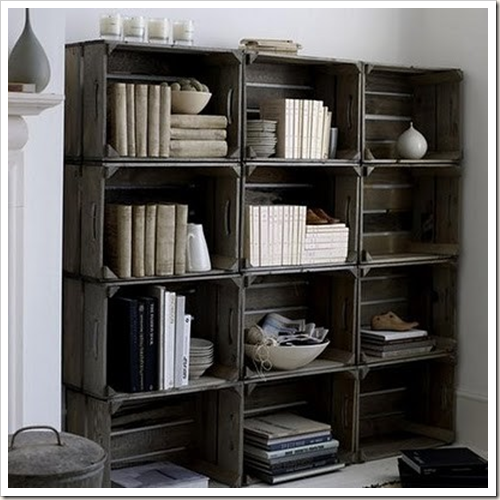 So I went to Michaels and bought six plain crates.  Originally, I planned to make a book shelf with them similar to the one in the picture above.  At only $10 each, I figured it was worth a shot. 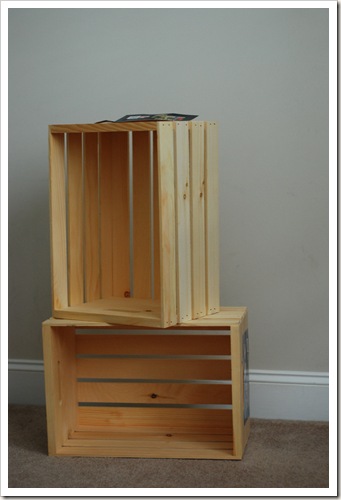 Warning: for some reason beyond me, Michael’s super glues the paper with the barcode on it onto the crates.  The only way to get the paper and the glue completely off the crate is to take a sander to it.  So after sanding off the glue (which was a bit annoying), I just applied stain to each crate.  I used a small brush to get into the little corners and crevices and then applied the rest with a rag.  But instead of making a bookshelf with the crates, I decided to use two crates stacked on top of each other on each side of our bed as side tables.  (And I moved our old side tables downstairs to the guest bedroom.)  I’m kind of loving the new rustic look right now.  And since they only cost $20 for each side table, if I change my mind later (which is likely), it won’t be a big deal.  I can always stack them up to make the bookshelf or  use them somewhere else in the house.  The great thing about crates is that they are versatile. 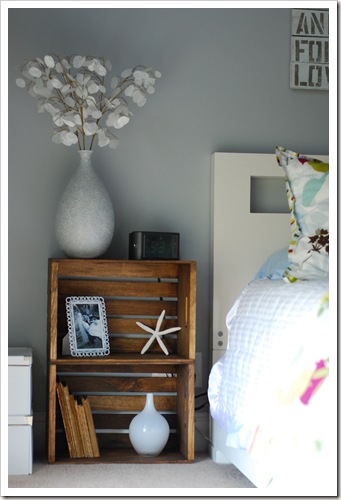