You may remember that several months ago, I was all into pallets and re-purposing the wood.  After ripping a few pallets apart and cutting the boards into equal sizes, Tim lined up four boards at a time and nailed them together.  (Sorry I don’t have a picture, so you’ll have to use your imagination for the moment.)  He made several of these for me, although at the time I wasn’t quite sure what I was going to make out of them.  I just knew I wanted to do something with them.  Sometimes it takes me awhile to get a complete vision for something.  I have to just let it sit in my mind until one day it hits me and I know just what I want to do.  So these boards sat untouched for several months.
Then, when Tim and I were in Seacrest, Fl. back in May, I was inspired by some of the things we saw while perusing through the shops. The prices for the items were more than what we wanted to spend, so we snapped some pictures and told ourselves that surely we could make something similar.  We figured it couldn’t be too hard, especially since we already had the boards.
We saw this picture frame.  I actually loved it, but it was like $80 (or was it $200?), I can’t remember, but either way, it was too much. 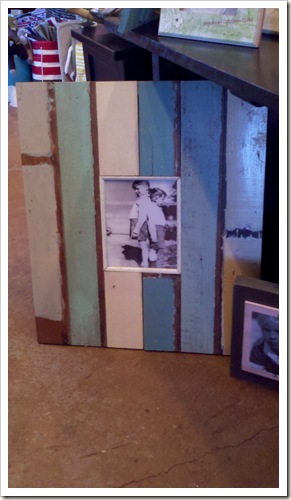 So when we got home, I pulled my boards out and started painting.  I painted the boards with several different (but similar) shades of paint which we already had sitting around in the garage.  And then I hot glued a starfish (which I picked up while we were in Seacrest) to the boards.  Super easy and the total cost was only $6 for the starfish. 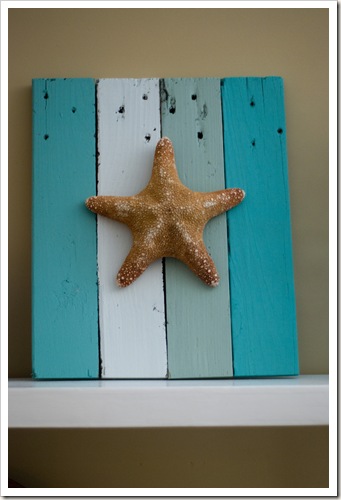 Here is my project on display in the living room.  I love that it reminds me of our trip to Seacrest. 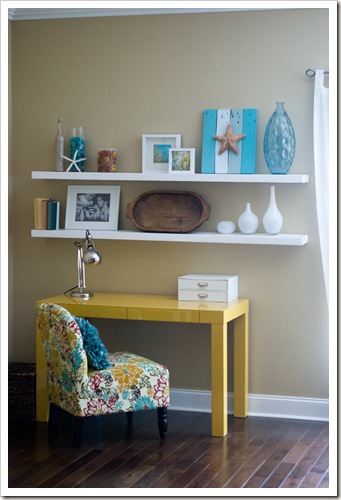 Here is another cute idea for a picture frame that we saw while in Seacrest. 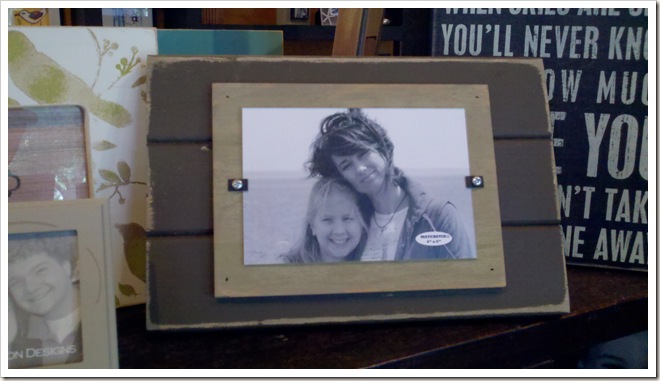 This is what I ended up doing with another set of our boards.  I had everything already laying around.  I used some  leftover paint on the boards, spray painted a previously black picture frame white, found a shell that I already owned, and then added some super glue to hold it all together.  That was all!  And the best part: it was free!  It sits in between the double sinks in the kids’ bathroom adding an extra touch of beachiness. 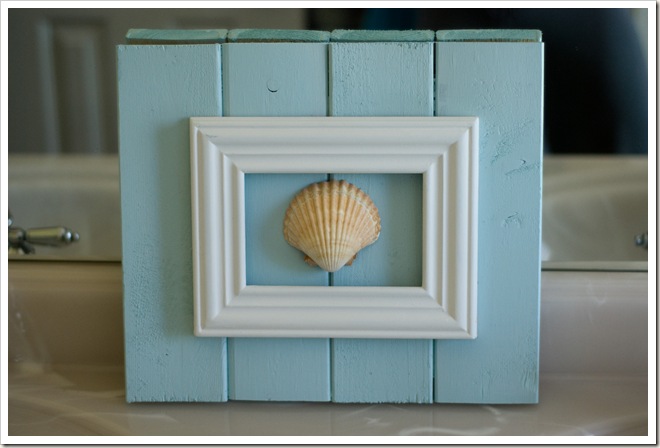 We have had a blank space above our bed for months now just waiting to be filled.  I would much prefer something meaningful and unique hanging there to a store bought print, so I was patiently waiting for inspiration to hit me or to fall head over heels in love with something.  Several months ago, I had written down a phrase and was hoping to use it someway in our bedroom, but hadn’t yet figured how.  The phrase I wanted to use was, “Never Stopping, Never Giving Up, Unbreaking, Always and Forever Love.”  I believe it’s from “The Jesus Storybook Bible” by Sally Lloyd Jones.  It’s a phrase that describes God’s love for His people, but it also reminded me of the love between Tim and me, so it had double meaning for me.
Ok, so hold that thought.
Now, if you are a pinterest fan, you may have already seen this next photo.  It’s been quite the inspirational photo on pinterest for what to do with old boards in a master bedroom. 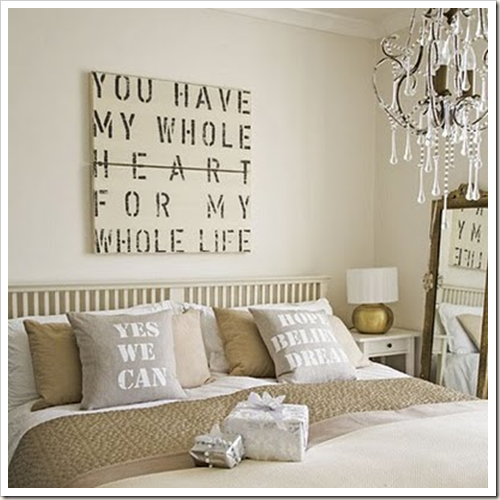 And in fact, it inspired me.  I decided to use the words from that afore mentioned phrase and paint them on the last two boards that I still had sitting around.
I used stencils to trace out the letters.  I left out “Unbreaking” because it didn’t fit and the quote still sounded fine without it. 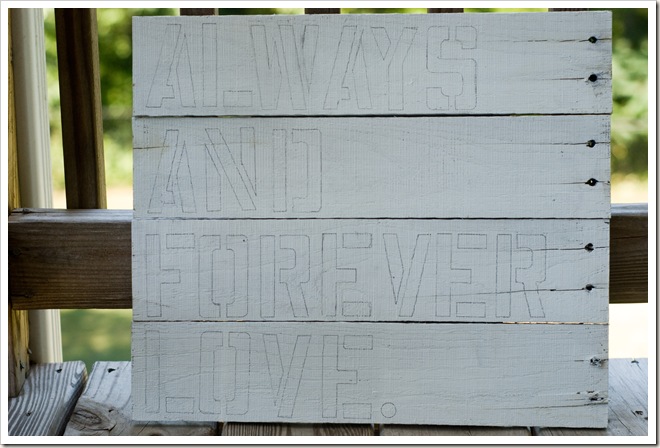 And then I painstakingly painted the letters. 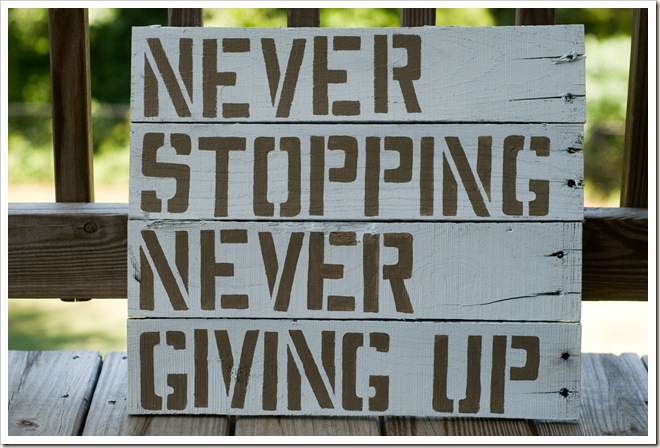 Afterwards, I gave it a good sanding.  In the process, Tyson asked me why I was sanding it.  He also noticed all the splits and holes in the boards and thought we needed new boards.  I told him that I liked them that way because they added character.  Tyson thought about that and then said, “Mater has A LOT of character.  Don’t you think, Mom?”  I laughed and had to agree with him.
Here is how my boards ended up.  I love them. 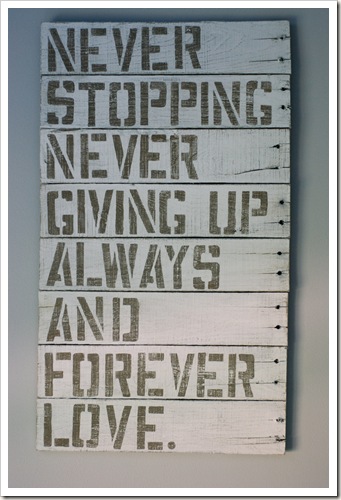 We obviously still need something else up there above our bed with it, but it will have to come in time.  I’ll know it when I see it (or imagine it).  Until then, I’ll just look at my sign. 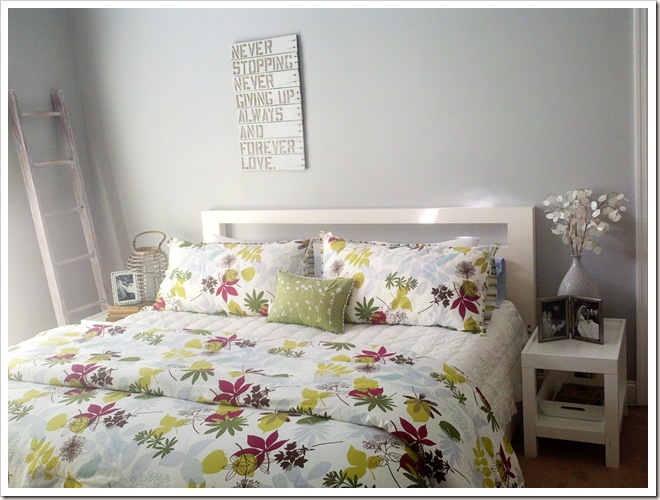