Continuing on with some more Ikea finds…

One item that was on our list to look for while we were shopping at Ikea was a new kitchen table.  Here’s a picture of our old table: 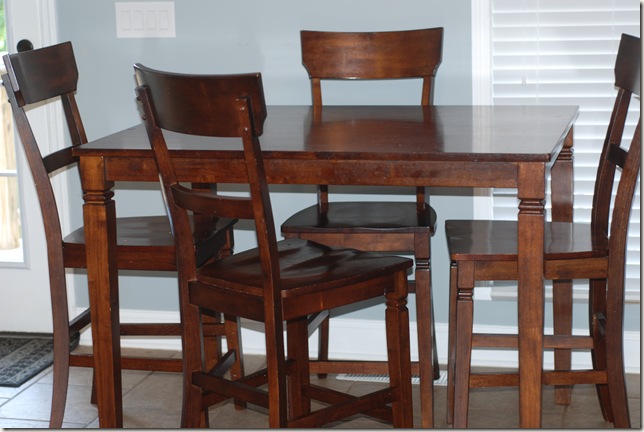 There’s really nothing wrong with it other than the fact that it’s not a great fit for our family anymore.  The most obvious thing being that there are only four chairs at this table and we are now a family of five.  And when we purchased this table a few years ago, we loved the extra height on the table and chairs, but now that we have a two year old that is constantly climbing up onto her chair, the extra height just makes the table more of a safety hazard.  Also, this table just wasn’t really cutting it when we had family or friends  joining us for dinner.  We always had to drag extra chairs in from the “formal” dining room and then squeeze everyone in around the table.  The extra chairs are actually even taller than these and this left people uncomfortably hunched over while eating (which is probably terrible for digestion!).   Honestly, we could have just sucked it up and put this purchase off for a few more months or maybe even a year if we kept Hudson in a high chair, but we decided that Ikea is a pretty affordable place to pick up a table, and since we don’t make it by there very often,  it just made sense to go ahead and buy one if we found one that we loved.

And we did find one that we loved!  In fact, the table was the first thing we both saw and agreed on immediately.  We loved it right off the bat and it is huge!  It’s plenty big for our entire family and any dinner guests that we might have over.  There’s even a leaf to add in the event that an entire army would be stopping by to eat dinner with us. 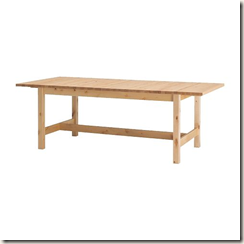 We picked out these chairs to go with it.  Originally we were going to get eight. 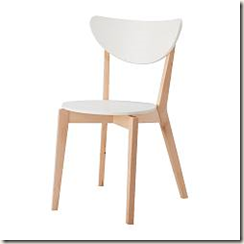 But then, we saw this bench.  We thought it would work perfect for the kids.  So we bought five chairs and one bench. 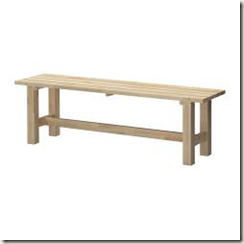 The table works best in our kitchen pushed up against the wall.  Tim and I each sit at an end and the kids sit on the bench.  There should be plenty of room on the bench for Hudson to join them there when he’s big enough.  When we have guests, we can just pull it out from the wall and set the other three chairs along the back.  The way we have it set up actually makes the kitchen seem bigger and roomier than before when we had the smaller table. 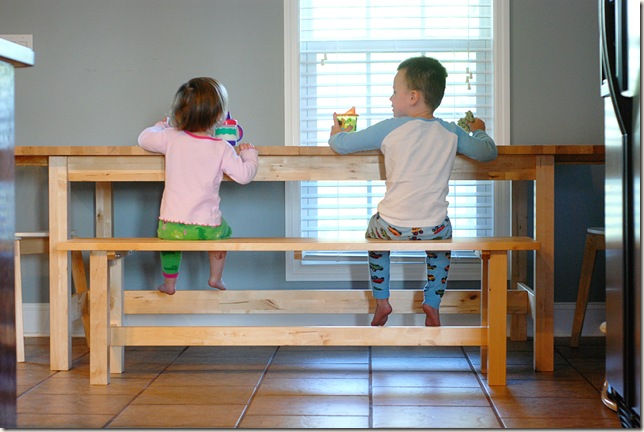 We love the lighter color of the wood as opposed to the dark wood table that we had before.  It really lightens and brightens up our kitchen. 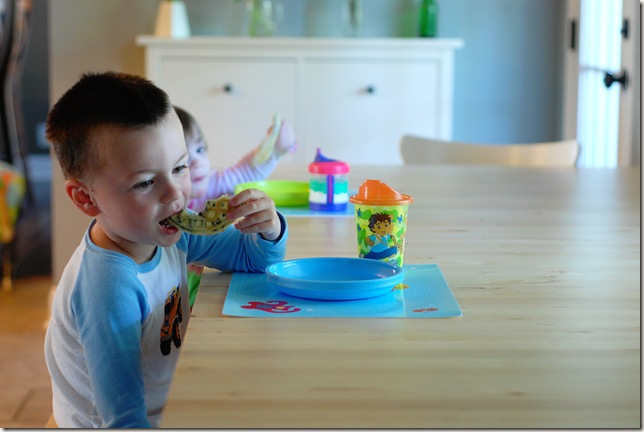 Do you guys remember when I told you I wanted some floating shelves in my living room?  ( I think I blogged about that.)  At the time, I didn’t anticipate ever making it to Ikea, so I persuaded Tim to build me some shelves for an office area in our living room.

Here’s the before shot: 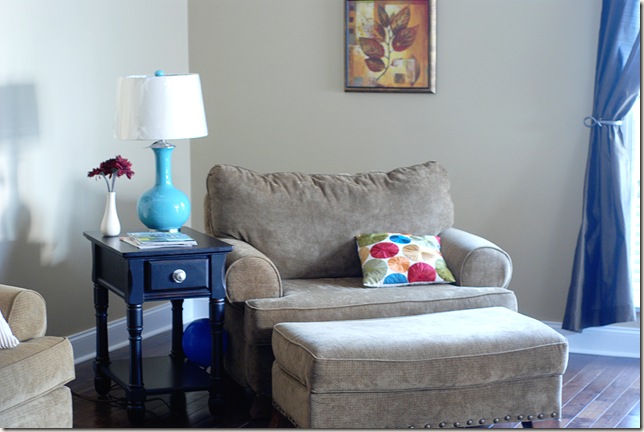 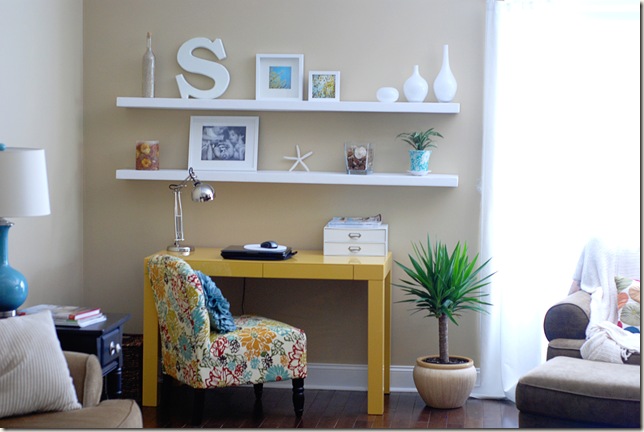 Tim did a great job building my shelves, but if we had known that we were going to get to go to Ikea just a few weeks later, we totally would have just waited and then bought them there.  At just $29.99 each, you can’t beat the price.  We spent about $60 for all the materials and then Tim spent hours building them and painting them for me.  In the end, it worked out, (I really love my shelves!) but there was an easier way.  The desk lamp, mouse pad, picture frames on the top shelves, white vases, and the clear vase with potpourri in it are all from Ikea.  Also, the white curtains (which are really hard to see in this picture) are also from Ikea.

Did I mention that I love Ikea?!!